The United Nations development Programme (UNDP) and the Oxford Poverty and Human Development Initiative (OPHI) developed a new version of the global Multidimensional Poverty Index (MPI). The global MPI covers 105 countries in total, which are home to 77 per cent of the world’s population, or 5.7 billion people. Of this proportion, 23 per cent of people (1.3 billion) are identified as multidimensionally poor.

For the 2018 global MPI, five of the ten indicators have been revised jointly by OPHI and UNDP to align the MPI with the 2030 Agenda. This is in response to the Agenda’s call for a better measure of progress toward Sustainable Development Goal (SDG) 1 – “to end poverty in all its forms” – and to help achieve the principle of leaving no one behind.

Our analysis of 2018 global multidimensional poverty offer both a global headline and fine-grained analysis for children, rural areas, 1127 subnational regions across 88 countries, 640 districts in India, and other critical subgroups. The purpose is only in part to inform and at times alarm: more fundamentally, the purpose is to empower and incite action that ends acute poverty across many dimensions.

On this page, you can read the Global MPI 2018 Report, key findings that include global, regional and subgroups highlights, the latest MPI Methodological Note (No. 46) and download the data tables of this update of the global MPI. You can also access the detailed algorithms (Stata do-files) underlying the global MPI 2018 for each country. OPHI Working Paper 121, by Sabina Alkire and Selim Jahan, gives an overview of the structure of the global MPI 2018.

Do visit our new Interactive Databank to explore the data intuitively.

If you are interested and download in individual countries, we have Country Briefings for each of the 105 countries that make up the global MPI 2018.

This animation provides an overview of the global MPI 2018.

The Global Multidimensional Poverty Index Report: The Most Detailed Picture to Date of the World’s Poorest People presents the global MPI 2018, a newly revised index based on a short but powerful list of 10 deprivations. During the launch of the Global MPI 2018, Achim Steiner further highlights that if development is about being more precise about directing the limited resources governments have and the indicators of the global MPI can aid that process. The revised global MPI is the joint work of OPHI and UNDP. The overarching aim of the revised MPI is to better align the global MPI with the SDGs (Alkire and Jahan 2018).

Chapter 1 provides a global overview of findings from the global MPI 2018. Chapter 2 focuses on India, presenting a case study on MPI from 2005/06 to 2015/16, with analyses of trends by age, state, caste, and religion, and a direct mapping of poverty at the district level in 2015/16. Turning first to the youngest on our planet, Chapter 3 assesses child poverty across all countries. Multidimensional poverty varies both within and across major geographic regions like Latin America or East Asia and the Pacific, and Chapter 4 presents some notable highlights. Going within countries, Chapter 5 scrutinises poverty levels and composition across rural and urban areas. Finally, Chapter 6 zooms in to investigate circumstances within and across countries according to subnational regions

The Global MPI 2018 shows that India has made remarkable progress. 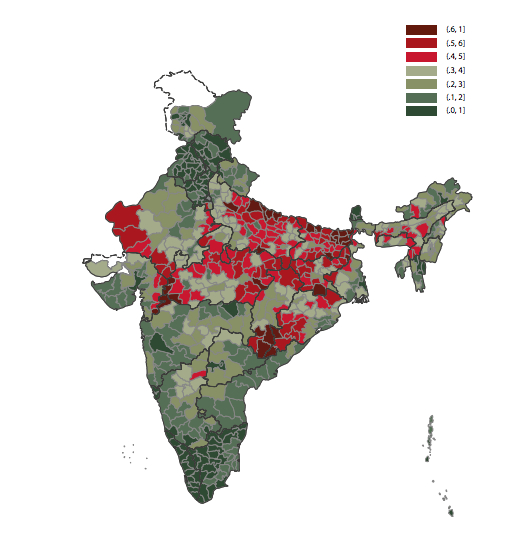 India has reduced its poverty rate drastically from 55% to 28% in ten years. 271 million people moved out of poverty between 2005/6 and 2015/16. While progress has been remarkable, the country still has the largest number of people living in multidimensional poverty in the world (364 million people).

If one considers the 364 million people who are MPI poor in 2015/16, 156 million (34.5%) are children. In fact, of all the poor people in India, just over one in four—27.1 percent—has not yet celebrated their tenth birthday. The good news is that multidimensional poverty among children under 10 has fallen the fastest. In 2005/6 there were 292 million poor children in India, so the latest figures represent a 47 percent decrease or a 136 million fewer children growing up in multidimensional poverty. When considering the durable and lifetime consequences of childhood deprivation, particularly in nutrition and schooling, this is a tremendously good sign for India’s future.

Find out more on India:

OPHI MPI Methodological Note No. 46 on the 2018 updates is available here.

This page highlights findings from the global Multidimensional Poverty Index (MPI) and provides a range of resources. The global MPI, revised and updated in September 2018, now covers 105 countries in total, which are home to 77 per cent of the world’s population, or 5.7 billion people.