You are here: Home » Global MPI 2019 launches in New York 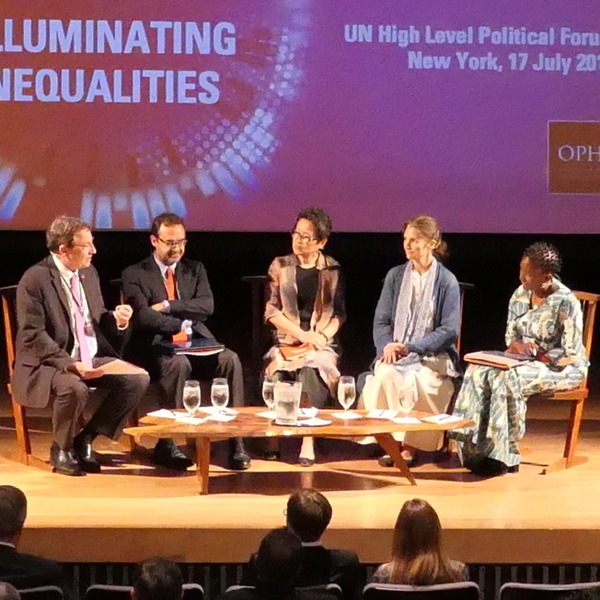 17 July 2019 – The 2019 global Multidimensional Poverty Index (MPI) was launched today in New York during the High-Level Political Forum of the UN.

The global MPI 2019 offers a tool to make progress towards SDG 1 to end poverty in all its forms and dimensions. It compares acute multidimensional poverty for 101 developing countries, which are home to 76% of the world’s population.

The 2019 global MPI publication Illuminating Inequalities released on 11 July 2019 offers both a global headline and a fine-grained analysis for multidimensional poverty among children, rural areas, 1,119 subnational regions and other critical subgroups. It explores inequality among the multidimensionally poor by using innovative methods to uncover intrahousehold inequalities, growth in the ‘bottom 40%’ of the multidimensionally poor and relationships with the Gini coefficient, an indicator typically used for economic inequality. In the report there is also a preview of trends in 10 countries drawn from an ongoing study of over 80 countries.

At the launch event, the Administrator of UNDP acknowledged that change in poverty was possible and that there had been a dramatic reduction in extreme income poverty from 36% in 1990 to 8% today worldwide. He signalled the need for a similar significant reduction in multidimensional poverty before moving on to invite the audience to consider the complexity of poverty and the scale of inequality in the world, identifying the critical importance of disaggregation in poverty measurement. Oversimplication by focusing on national averages is counterproductive; poverty is to be found everywhere. “To address poverty” he said “we have to understand the reality of poverty much more clearly”.

Sabina Alkire presented key findings from the report – which goes beyond averages to reveal inequality across countries, and within countries across subnational groups. For example the range of multidimensional poverty across Uganda’s regions (6%-96%) mirror the range across African countries (6-92%). Inequalities are evident across age groups, with children comprising half of the MPI poor – and among children, with more girls being MPI poor and out of school than boys in South Asia. The report contains an innovative analysis of inequality among the poor and of growth of the bottom 40% in terms of MPI.  Finally, looking across time, eight of the 10 countries studied reduced MPI significantly, with India being the fastest; the report discloses how poverty was reduced by indicator, for example Ethiopia, India and Peru had different pathways to success. And it shows whether the poorest regions are reducing poverty fastest – which they are in Haiti and India, for example.

The presentation was followed by a high-level discussion among the panellists. Nabeela Tunis, Minister of Foreign Affairs and International Co-operation, Sierra Leone, and Gonzalo Hernández Licona, Executive Secretary of CONEVAL in Mexico expanded on the utility of multidimensional poverty measurement in a national context for poverty reduction programmes and the importance of internationally comparable indices. Gonzalo Hernández Licona expanded on the theme of inequality. Through disaggregation with MPI data the Mexican government has been able to identify that “extreme poverty of indigenous rural women is 45% in Mexico” whereas “extreme poverty of indigenous urban men is 4%”, a clear priority for policy. Haishan Fu, Director of the Development Data Group from the World Bank, reinforced the complementarity of monetary and multidimensional measures and the importance of collaboration in poverty measurement. She also acknowledged the prevalence of income poverty in middle-income countries similar to the situation revealed in the report for multidimensional poverty. Dynamic exchanges from the floor explored further the conceptualisation of poverty, discussing the choice of indicators to identify the most vulnerable.

Video of the event here.

Photos of the event here.

Full data tables and do-files (of all the details of MPI data plus population values, standard errors, sample sizes and more) here.

“The MPI recognises that poverty is complex, contextual, subjective and very real in different ways and contexts.”

“By simply taking averages we are depriving the policy community of important tools.”

“The MPI is a journey, poverty eradication is a journey. Much of what the MPI has brought to this debate is a sophistication that allowed us to escape the very dangerous risk of oversimplification. We have to understand the challenge of poverty much more clearly.”

“Sometimes the distance between the worlds of poverty and the wealthy is the width of a brick wall.”

“MPIs reveal aspects of poverty that have been previously invisible”

“In Mexico we have been using the MPI for the past 5-6 years. The government and states are using it. And they are competing who is going to reduce poverty more. At the same time they are asking which dimensions to focus on in order to eliminate poverty with the help of the MPI.”

“But of course with national MPIs, we cannot compare internationally, as we can with the global MPI. And that is why we think that there should really be a place for us to report this so that we can compare.”

“Our Sierra Leone national MPI report opened our eyes. Previously we had been looking at poverty from an income perspective. The multidimensional lens helped us understand why we have not been able to make the right kind of progress. It helps monitoring and evaluating.”

“It is working for us and it works globally.”

“Looking at poverty in its many dimensions is a must.”

“We clearly recognise, monetary-based, consumption- and income-based, poverty is only one part of the poverty puzzle.”

“I think joining forces to continue to challenge each other and inspire each other is very important.”

“A lot of what we can do, or what we cannot do, is constrained by the kind of data we have….we must join hands to invest in the better data we need in order for us to have the best understanding of poverty, and also where policy would make a big difference. This is why I think we are converging, and this is also where we might become stronger partners.”

Video of the event here.

Photos of the event here.

Full data tables and do-files (of all the details of MPI data plus population values, standard errors, sample sizes and more) here.