You are here: Home » In Media » Vietnam joins Peer Network as it moves to adopt multidimensional poverty measure 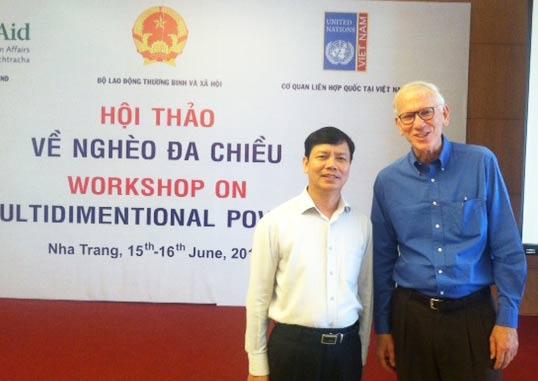 Vietnam’s Vice-Minister of Labor and Social Affairs, Nguyen Trong Dam, has announced that he will join the global Multidimensional Poverty Peer Network that was formally launched on 6-7 June, as Vietnam moves to adopt a multidimensional framework for measuring poverty.

Vice-Minister Dam’s announcement came at the end of a workshop on multidimensional poverty in Nha Trang, at which OPHI Research Associate John Hammock presented the Alkire Foster method of multidimensional measurement, and described how it is being applied in Mexico, Colombia, Bhutan and other countries.

The workshop brought together close to 100 participants from the national government, academia and think tanks, as well as representatives of ethnic minorities and local communities. At the end of the workshop, Vice-Minister Dam set out a timetable for establishing a national Multidimensional Poverty Index (MPI) to be included in Vietnam’s 2015-2020 National Plan.

The Vice-Minister expressed his intention to visit other members of the Multidimensional Poverty Peer Network who are implementing national measures, in order to learn from their experiences. The network was formally launched in Oxford by President Juan Manuel Santos of Colombia and high-level representatives of Mexico and around 20 other governments.

The Ministry of Labor and Social Affairs’ decision to move to a multidimensional approach to poverty measurement was covered by the Vietnamese media, including Việt Nam News, the national English-language daily. You can read the article in full here.