Tunisia has launched plans to develop an official national multidimensional poverty index (MPI). The plans were presented and discussed at a workshop in Tunis on Wednesday 27 May organised by the Tunisian Ministry of Development, Investment and International Cooperation (MDICI), the National Institute of Statistics (INS) and the United Nations Development Programme (UNDP).

As well as an opening session led by these three partners, the workshop featured a presentation from the INS technical team who gave an overview of progress so far, including discussion on dimensions, indicators, cut-offs and data considerations. OPHI Research Officer Bouba Housseini (pictured below, right) also gave a presentation on the Alkire Foster methodology and the Multidimensional Poverty Peer Network.

The workshop was attended by approximately 50 participants, including academics and representatives from government, civil society and international agencies.

The Tunisian MPI will be constructed using the Census 2014 and be updated later using the households spending and consumption survey 2015 conducted by the INS. Further workshops and consultations are planned over the next few months as the MPI is developed, with the aim of officially releasing the index later this year. 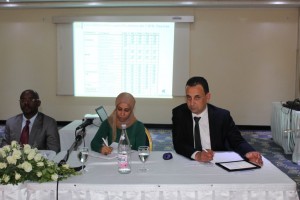 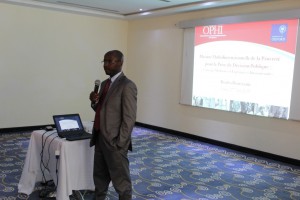 Find out more about countries that have developed national MPIs.