What is multidimensional poverty?

Most countries of the world define poverty as a lack of money. Yet poor people themselves consider their experience of poverty much more broadly. A person who is poor can suffer from multiple disadvantages at the same time – for example they may have poor health or malnutrition, a lack of clean water or electricity, poor quality of work or little schooling. Focusing on one factor alone, such as income, is not enough to capture the true reality of poverty.

Multidimensional poverty measures can be used to create a more comprehensive picture. They reveal who is poor and how they are poor – the range of different disadvantages they experience. As well as providing a headline measure of poverty, multidimensional measures can be broken down to reveal the poverty level in different areas of a country, and among different sub-groups of people.

Watch a video produced by UNDP El Salvador and OPHI exploring what poverty means, from the perspective of those who are experiencing it:

Poverty in El Salvador from the perspective of the protagonists

OPHI has developed a methodology for measuring multidimensional poverty known as the Alkire-Foster (AF) method.

OPHI researchers apply the AF method and related multidimensional measures to a range of different countries and contexts. Their analyses span a number of different topics, such as changes in multidimensional poverty over time, comparisons in rural and urban poverty, and inequality among the poor. For more information on OPHI’s research, see our Working Paper Series and OPHI Briefings.

OPHI also calculates the Global Multidimensional Poverty Index (MPI), which has been published since 2010 in the United Nations Development Programme’s Human Development Report. The Global MPI is an internationally-comparable measure of acute poverty covering more than 100 developing countries. It is updated by OPHI twice a year and constructed using the AF method. 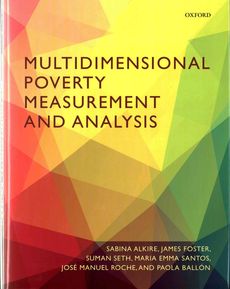 Read the book and download the chapters.
Watch the videos related to book’s topics.

Watch a short video about OPHI’s work on multidimensional poverty and the MPI:

View a presentation about OPHI’s work on multidimensional poverty in English, Spanish or Russian.

Find out about other ways the AF method is used in research and policy.