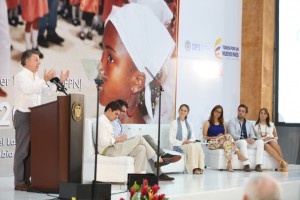 More than 100 policymakers and senior officials have come together this week in Cartagena, Colombia, for the third annual meeting of the Multidimensional Poverty Peer Network (MPPN).

The MPPN is a South-South initiative of over 40 countries and institutions, coordinated by OPHI, that supports policymakers to develop multidimensional poverty measures.

President Santos of Colombia addressed the MPPN on the first day of the meeting. In his speech, he talked about the importance of the MPI for the Colombian government. He said:

“Understanding the complexity of the multiple dimensions of poverty is not easy but it is the right thing to do, and that is what we are doing.”

“We were one of the first countries to implement MPI measurements… this also guides our 2014-2018 national development plan.”

“The fight against multidimensional poverty is harder but much more effective.”

In his speech Mr. Santos highlighted that last year, with the support of the Organization of American States, many countries visited Colombia in order to learn from the country’s experience of implementing an MPI.

The President’s speech was followed by a discussion panel with the Colombian ministers of education, health, labour and education who shared their experiences of how the MPI has supported their work and government goals.

The third annual meeting of the MPPN runs from 2-3 June 2015 and is hosted by the government of Colombia.

Find out more about the MPPN and Colombia’s national MPI.