You are here: Home » In Media » OPHI’s research featured in Economist article on approaches to eradicating poverty

OPHI’s research on changes to multidimensional poverty over time features in an article on eradicating poverty in this week’s issue of the Economist. 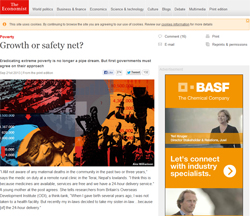 The article, titled ‘Growth or safety net?’, looks at the relationship between boosting incomes and reducing poverty, and cites OPHI’s finding that Nepal had reduced multidimensional poverty fastest of 22 countries having data on multidimensional poverty over time, despite being the poorest country in South Asia. ‘…As Nepal shows, cutting poverty is not just about boosting incomes,’ the author writes.

Deprivation, the article explains, takes many forms, including the lack of schools, clean water, medicines and family planning. ‘Using her MPI measure, (OPHI’s Director Sabina Alkire) finds that about one-sixth of Vietnam’s population is poor by income, and one-sixth is “multidimensionally poor”. But they are not the same people: only about a third of the groups overlap,’ it says.

The article goes on to describe how charities and others are urging the governments meeting in New York this week for the 68th session of the UN General Assembly to adopt exacting targets for non-income measures of deprivation.

OPHI, together with the German Ministry for Economic Cooperation and Development, CONEVAL of Mexico, the Department for Social Prosperity of Colombia, and the new Multidimensional Poverty Peer Network, will hold an event at the UN to call for a new multidimensional poverty index (MPI) 2015+ to support the post-2015 development goals. You can watch a live webcast of the event on Tuesday 24 September at 1.15-2.30 pm (EST) at http://webtv.un.org.

You can read the Economist article in full here. You can find out more about the event ‘Multidimensional poverty measurement in the post-2015 development context’ here.