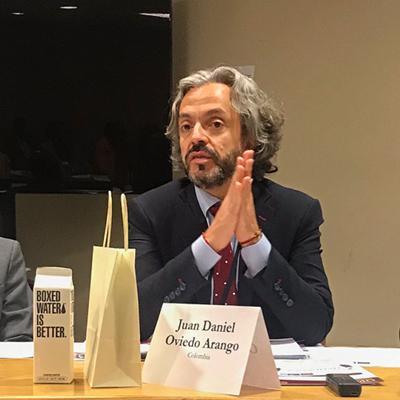 On 5 March 2020, the Multidimensional Poverty Peer Network (MPPN) hosted a side event at the 51st United Nations Statistical Commission entitled ‘Using a Multidimensional Poverty Index (MPI) to coordinate policies and achieve SDGs’. It was standing-room only as statisticians and other stakeholders gathered in New York to discuss and share their experiences of using national MPIs as tools to coordinate policies and track progress towards the Sustainable Development Goals. Of the twelve speakers, ten shared plans to launch or finalise their MPIs, or revise existing MPIs with added dimensions.

The side event was chaired by Risenga Maluleke, the Statistician-General of Statistics South Africa. Speakers included representatives from the National Statistical Offices of Angola, Botswana, Chile, Colombia, Ghana, Kenya, Libya, Mongolia, Paraguay, Philippines, Tanzania and Uganda as well as from OPHI and the MPPN.

Leading the way for future statisticians to measure multidimensional poverty

‘Over the next hour, we will hear presentations from 12 Heads of national statistical agencies on how they are building and using multidimensional poverty measures to fight poverty by coordinating actions to help the SDGs.’

‘Let us hope that our discussions this afternoon will be an inspiration to help us find a way to chart the path forward, so that those who come behind us in the future, future generations, can actually look at us as trailblazers.’

‘We are working with UNDP and with OPHI to increase the quality of those indicators and to have a national Multidimensional Poverty Index. We have a global one that UNDP and OPHI produced, but we have to create our one, with our own dimensions and indicators.’

To kick start the process, there was a workshop held in February last year. The workshop had the title ‘Poverty Eradication Strategy and Policy National Workshop’. Since, Botswana has worked with OPHI and engaged in consultations with other stakeholders from academia. Next, Botswana will decide the poverty cut off in May 2020, following which the MPI will be adopted.

‘We have seven years’ experience in the measurement of multidimensional poverty. Work started in 2013 and the MPI was published in 2014. This MPI was developed to complement income poverty. Each dimension and indicator allows diagnosis of the situation of the most vulnerable people in our country. This measure serves as an input for public policy discussions to improve the quality of life of our people.’

‘The government convened a poverty measurement commission to update the poverty and extreme poverty lines. The commission’s proposal and institutional technical board was formed with the Ministry of Social Development, National Statistical Institution and ECLAC as a technical advisor. The social development ministry proposed relevant dimensions and thresholds. The proposal was based on the AF [method], and shared with sectoral ministries. After feedback, we consulted with OPHI, and tested then released our indicator.’

‘Colombia is a strong believer of the role of multidimensional poverty indices as far as evidence-based public policy in our country. As evidence, I am here with Laura Cepeda, the Deputy Director of Social Policy.’

‘In Colombia, the three institutions that lead on poverty – the Ministry of Planning, the Presidential Agency for Poverty Reduction and Social Prosperity, and the National Statistics Office which is responsible for the calculation of poverty indicators – created an independent expert committee of poverty measurement in Colombia that includes international institutions and academics and works on coordination, governance, and the assurance of technical independence and transparency of our MPI.’

‘From 2010-2016 the MPI was disaggregated into the 5 or 6 regions. In 2018, when the new government was appointed, the Ministry of Planning with the National Statistical Office convinced the Ministry of Finance to have enough disaggregation to allow Colombia to disaggregate by our 32 states, which is very beneficial for policy use.’

‘But what about the 1,102 municipalities? There are 5 dimensions and 15 indicators in our MPI. We have managed to grasp 13 out of our 15 variables in the census. And thanks to the existence of the National ID number, we managed to cross administrative records. So for the first time in the history of Colombia we have a municipality-level MPI proxy that will inform local plans to fight poverty and promote social prosperity.’

Ministry of Planning aiming to launch an MPI in June 2020

‘For Ghana, we agree that poverty has more than one dimension, it is not only monetary. We set up the steering committee for the Multidimensional Poverty Index and engaged ministries and departments, particularly those who need the data for informing policy. Ghana has used the Living Standards Survey to prepare our national MPI which we plan to launch in June this year by the Minister of Planning.’

‘The MPI has been able to show the number of people that are poor and also to tell us the intensity of their deprivations for these dimensions. For Ghana we found that, the MPI identified the traditionally wealthy areas of Greater Accra and Ashanti as the richest areas and confirmed that the northern regions were the poorest. The MPI also showed the real dimensions that the northern regions are poor in, and that even in the traditionally rich areas of Ashanti and Accra, there are pockets of poor people. This will really help us in targeting the poor in urban areas.’

‘Kenya has traditionally used monetary measures, but we now appreciate the need to do both monetary and non-monetary assessments of poverty. Plans are underway to do that. Based on the 2015/16 survey we will be able to compute and compare non-monetary and monetary poverty. We have appreciated working with the Oxford team. We have a road map to ensure we have a National MPI for Kenya. We have had training, and agreed to have an enlarged team built so it can do sustained work. There is a lot of opportunity because we are doing continuous household surveys in Kenya so that we can have annual poverty numbers. We also hope to tap into the results of population and housing census. So there is a lot of opportunity.’

‘What we need most in our region are political champions to drive this process. Advocacy is key to the success of this work. We are a member of the African Peer Review Mechanism team, and the issue of measurement and using MPI is part of our discussions, so that we have strong leadership champions and become like our friends in Colombia.’

Abdella Zidan Allag, Chairman of Bureau of Statistics and Census of Libya

Expanding the original MPI to include a conflict dimension

‘Back in 2018, we worked together with OPHI and UNFPA to conduct the first ever MPI for Libya using data from 2016 and 2018. Our MPI included 3 dimensions: labour, education and cost of living.’

‘Now we are updating some of the data…for the second MPI for Libya, adding one dimension, which is important for Libya, which is a country in a conflict right now. This is the dimension of security. We have the chance now to get some data from the field in Libya about the internally displaced persons and the militias and the conflict areas.’

‘We’re looking forward to continue our work with OPHI and UNFPA because they are helping us getting some up to date data about the Libyan situation.’

‘Assisted by Asian Development Bank, Mongolia has generated a pilot MPI based on 11 non-monetary indicators across 5 dimensions. The underlying data for the MPI is sourced from the pilot survey of over 1,000 households. The Mongolian MPI unlike is not aimed to be comparable….’ The 11 indicators of the MPI are based on ‘two consultative engagements with stakeholders in… 2019 (October and November).’

‘A strong feature is…intersectionalities – the simultaneous multiple deprivations for persons and households… There is also a link between consumption and multidimensional poverty. Only one in 10 persons are poor in both consumption poverty and MPI metrics.’

Mongolia plans ‘to release official estimates of the [national] MPI in 2021 based on [the] 2020 household social-economic survey. With the MPI, government has an additional metric with which to judge its success in reducing poverty in the country.’

‘Since statistics are meant not only to be produced, but also communicated effectively to data users, Mongolia intends to develop communications strategies for the MPI.’

Paraguay looks forward to launching its official MPI for the first time in the first semester of 2020 and developing a communications strategy for launch. Paraguay’s national MPI has four dimensions: labour, housing, health, and education – and 15 indicators.

MPI to be reported annually from 2021 as an official statistic, and included in community-based monitoring surveys to inform local planning and programming

‘Poverty is indeed multidimensional…thus income alone is not fully reflective of [people’s] deprivation.’

Developed using the Alkire-Foster methodology, Philippines has a pilot MPI which is being assessed by the highest statistical board in the country.

The plan is to report the MPI annually from 2021 as an official statistic, and also to include it in the Community-Based Monitoring Survey (CBMS), in order that MPI can be used by local governments for planning, targeting, and programme design.

An interesting feature of Philippines’ MPI is its tight link to policy. For example, an April 2019 law requires the state to uplift the quality of life of the poor. The MPI is stated in the law as a measure to be used in identifying who constitutes the poor for social protection.

Tanzania has a draft national MPI with 4 dimensions and 16 indicators, built from the 2017-18 household budget survey. The process has involved consultations with many stakeholders inside and outside government, and is nearing the final stage before collaborating with OPHI and UNDP to finalise the MPI and communicate it proactively.

Tanzania’s MPI will be ‘disaggregated in order to better inform policy makers and to monitor national and regional development frameworks in a broader way’.

Uganda has been using consumption poverty since 1992 and is now using the OPHI methodology to generate an MPI that will be launched in the next few months. The MPI builds on extensive consultations with government Ministries, Departments, Agencies, Civil Society, Development Partners and Subnational Governments.

The Africa Peer Review Mechanism has an expanded mandate to achieve the aspirations of agenda 2063, which include issues of poverty measurement. The APRM is likely to draw on SDG 1.2 and national MPIs or the global MPI for this review of governance.

Silencing the guns is also critical in some contexts. Thus security may be an increasingly important dimension to consider in constructing certain national MPIs.

‘In the Social Science Citation Index, the most highly cited paper for the term ‘poverty measure’ or ‘measurement’ is my 1984 FGT paper, followed by Amartya Sen’s 1976 paper, followed by Sabina and my Multidimensional poverty paper in 2011, followed by Sir Tony Atkinson’s 1987 paper on poverty – so the trending interest in academia remains.’

‘In a World Bank Commission of which he was chair, the late Sir Tony Atkinson, stated in the commission’s final report that the Bank should incorporate national and global monetary poverty measures alongside a Multidimensional Poverty Index built upon the Alkire-Foster counting approach. He did not advise including monetary poverty as an indicator in the MPI, and mostly the wisdom of maintaining separate measures has been recognised.’

The benefits of sharing knowledge through the MPPN

‘It is wonderful to witness the examples of what can be achieved when combining caring for the welfare of the poor, political will, and extraordinary technical skills. One indicator can be the beginning of big transformations when it is combined with political will. The MPPN is a space for exchanging ideas on how to measure poverty in a multidimensional way, and how to use it as a tool for public policies.’

‘With these exchanges, we will move faster towards target 1.2.2 of the SDGs: the reduction of poverty in all dimensions, according to national definitions.’