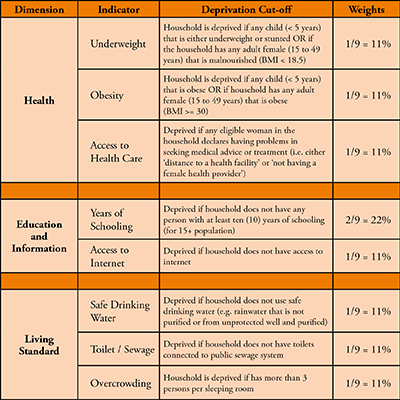 8 June 2020 – Two small island developing states (SIDS) have launched their first official national multidimensional poverty indices (MPI) within a month of each other and in the midst of the COVID-19 pandemic.

Seychelles and Maldives join the Dominican Republic as the first SIDS to develop national MPIs to track multidimensional poverty in their respective countries.

The newly released MPIs will be used to complement existing monetary poverty measures in both countries. The MPIs were tailored to the context of each country with the technical support of OPHI. Both measures reflect the distinctive characteristics of poverty in each context. With the shock of the COVID-19 pandemic to tourism and employment, the MPIs will be a vital tool to monitor the multidimensional poverty of the populations in both countries and could also be used to target vulnerable populations.

Director of OPHI, Sabina Alkire said of the launches: ‘We at OPHI are full of admiration and regard for the teams in the Seychelles and Maldives who prepared and launched their national MPIs. Each team worked with great commitment and competence, to build a technically rigorous MPI that was fit for purpose. Due to the novel coronavirus pandemic, which has decimated the tourism industry for the moment, both countries are also facing the challenge of using the MPIs to invest attention and care in supporting the lives of the poor and newly poor. It has been a joy to celebrate their efforts thus far. Our firm hope is that the National MPIs will be a beacon for the disadvantaged, illuminating difficulties and inviting appropriate responses from many quarters.’

The Seychelles MPI was launched on 21 May 2020. It was developed by the National Bureau of Statistics for the Poverty Alleviation Department of the Ministry of Family Affairs. The results are based on data from the special module attached to the national Quarterly Labour Force Survey (QLFS) of the third quarter of 2019.

The Seychelles MPI measures deprivations across fourteen indicators grouped into four dimensions: health, education, living standards and employment. An individual is considered multidimensionally poor if they are deprived in a quarter or more of these weighted indicators. In Seychelles, the indicator that contributes most to overall poverty is school attainment followed by NEET: eight percent of people live in households in which at least one person, aged 18 years or more, has not completed secondary level of education, and six percent live in households where at least one young person (aged 15–24 years) is not in employment, education or training (NEET).

The Maldives MPI, launched on 4 June 2020, was developed by the National Bureau of Statistics in partnership with the UNICEF Regional Office South Asia (ROSA) and UNICEF Maldives and with OPHI’s technical support. The results are based on data from the Demographic Health Survey (DHS) 2016/17. The Maldives MPI tracks eight indicators relating to three dimensions: health, education and information, and living standards. A person is considered multidimensionally poor if she/he is deprived in a third or more of these indicators. 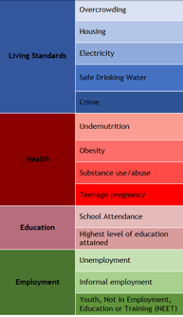 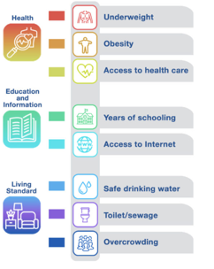 The two measures for Seychelles and Maldives cannot be compared to each other as the structures differ according to the national context of each. Nevertheless, it is interesting to see that both countries include obesity among their health indicators – perhaps reflecting shared challenges in relying on imported food that can be expensive or poor quality.

According to the Maldives MPI, 28 percent of the population is living in multidimensional poverty with an average intensity of nearly 51 percent of the weighted indicators. The MPI for Maldives is 0.145. Trend analysis shows that Maldives’ more than halved its MPI from 2009–2016, from an initial headcount ratio of 70 percent – stupendous progress indeed. In Maldives, multidimensional poverty is much higher than monetary poverty as 8 percent of the Maldivian population live below the poverty line of MVR 74.

At the national level, years of schooling contributed close to one fifth (19 percent) of overall poverty in Maldives, and access to health contributed 16 percent. The Maldives findings indicate that 87 percent of people who are multidimensionally poor live in the Atolls, but only 13 percent on the most populous capital of Male’.  Children bear the greatest burden of poverty and have a higher likelihood of being multidimensionally poorer than any other age group, with one-third of the 0–17 years old children living in MPI poor households. Among households with at least one member with some form of disability, 34 percent of people are poor compared to 27 percent in households without any disabled member.

SIDS were first recognised as a distinct group of developing countries at the United Nations Conference on Environment and Development in 1992. SIDS share similar development challenges including small populations, limited resources, fragile yet often strikingly beautiful environments and dependence on international trade and tourism.

The examples of Seychelles and Maldives provide trailblazing examples for other SIDS of how multidimensional poverty measurement can illuminate deprivations for more efficient poverty reduction policies.