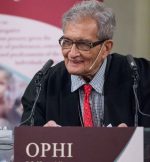 Professor Amartya Sen spoke at  a series of oversubscribed events at Oxford University on Wednesday 18 January.

At an afternoon Distinguished Public Lecture entitled “Democracy and Social Decisions,” Professor Sen addressed the need for quality public discussion of issues ranging from welfare economics to political problems. He highlighted the demonetarisation in India and the Brexit vote in the UK.

At a morning seminar at Magdalen College, Oxford, the Nobel Laureate presented significant new chapters of the forthcoming volume Collective Choice and Social Welfare. The conversation surrounded the re-issue of Collective Choice (1970), with new arguments and results, alternating between the mathematical and non-mathematical to discuss choice, welfare, inequality, poverty and rights.