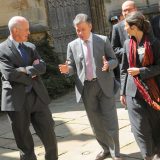 We at OPHI are thrilled that President Juan Manuel Santos was awarded the Nobel Peace Prize today, 7 October 2016. President Santos is a figure who has been taking the lead not only on peace but also on reducing poverty in all its dimensions. This is a key to a lasting peace, and a just peace. We wish President Santos and the people of Colombia the very best in the road ahead.

OPHI have been honoured to learn from President Santos’ leadership. He is a scholar with a curious and rigorous mind, a journalist keen on changing hearts as well as minds, and a politician seeking to use his formidable energies and skills to redress disadvantage and build peace 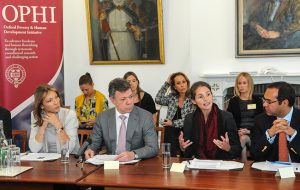 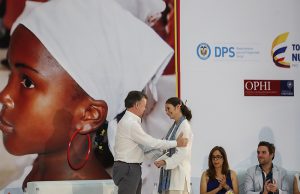 In June 2015, President Santos and his government hosted the MPPN meeting in Cartagena, Colombia, showcasing Colombia’s leadership in using their national multidimensional poverty index (MPI) to coordinate and deliver accelerated poverty reduction in accordance with ambitious targets set in their national plan. Colombia’s ministers and cabinet shared how a round table led by President Santos had provide a way for them to learn from each other about interlinkages among their sectoral responsibilities, how collaboration increased efficiency.

On 22 September 2016, the Government of South Africa organised a side-event of MPPN co-hosted by OPHI at the United Nations General Assembly. President Santos’ speech emphasised: “We have been leaders in the implementation of the Multidimensional Poverty Index (MPI) because we understand that poverty is an issue that goes beyond simple income and the index contributes to our aim of achieving a more just and equitable society. It has also allowed us to better organize our public policy and prioritize the most vulnerable.”

President Santos also stressed how reducing poverty in all its dimensions is vital to a stable peace: “The challenge before us to build a stable and lasting peace goes hand in hand with the goal of overcoming poverty and recommitting to building a new country with a better future for our children, who no longer will be part of the conflict, but instead will be in their schools, in their homes.” His speech was delivered by Tatyana Orozco, Director of the Department of Social Prosperity, as he had to return to Colombia in the days leading to the signing of the final peace accord.

In closing, we affirm our deep respect and admiration for President Santos for being a voice for the poor. Amartya Sen appeals to us not to become ‘coolly accustomed’ to poverty and destitution, but rather to turn with determination to redress these. President Santos has led the way, and we salute him.