You are here: Home » OPHI at the HDCA 2016 Conference in Japan

OPHI at the HDCA 2016 Conference in Japan 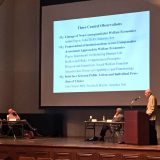 Alkire was also part of the panel discussion on welfare economics and the capability approach, together with Amartya Sen, Ravi Kanbur, Kotaro Suzumura (Hitotsubashi University), and Enrica Chiappero (University of Pavia).

Christian Oldiges chaired the parallel session on “Operationalizing the Capability Approach’’ and presented his paper titled “Measuring Malnutrition and Dietary Diversity: Theory and Evidence from India”.