You are here: Home » OPHI and MPPN hosted a Side Event at UN Statistical Commission 50th Session on 5 March 2019 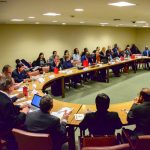 On 5th March 2019, Oxford Poverty and Human Development Initiative (OPHI) and the Multidimensional Poverty Peer Network (MPPN) hosted a side event at the 50th United Nations Statistical Commission titled “Multidimensional Poverty: Measurement for Action.” More than 70 statisticians and other stakeholders gathered in New York to discuss progress and issues with developing and implementing multidimensional poverty measures to reduce poverty and encourage policies that leave no one behind in the pursuit of the Sustainable Development Goals (SDG’s).

Highlights include the following:

Risenga Maluleke, Statistician-General of Statistics South Africa:
“The next hour will be a real feast of interest. You will hear a cascade of presentations from 14 National Statisticians on multidimensional poverty metrics and how these are used in action to complement monetary poverty measures and fight poverty in all its dimensions.”

Lisa Grace Bersales, National Statistician, Philippines:
“When we reported the MPI to our Philippines Statistics Authority Board, we told the different ministries that we will tell you where most Filipino families are most deprived. And when our Ministry of Budget heard this, they said: ‘Oh, we want to know that.’ Because when we approve proposals of budgets of certain sectors—health, education, labor—we want to know if indeed these are where the budget should be… So it’s not just about policy, but it’s also about where government financing will prioritise. This is really what we wanted the MPI to be focused on.”
See press release from the Philippines here.

Yemi Kale, Statistician General, National Bureau of Statistics, Nigeria:
“As far as policymakers are concerned, you see them asking for disaggregation of the MPI. It’s not just at the national level, but also at the state level. States want to know which deprivations are worse and you can see them actually designing policies to tackle certain areas.”
“This can also be used to locate where the poor are. So the National Social Safety Net was designed using the MPI numbers across different states to target those states and areas with the highest deprivations. And you can see that the policies were targeted towards those areas in designing the entire policy framework.”

Julio Santaella, President, National Institute of Statistics and Geography (INEGI), Mexico:
“In the definition of these variables [that go into the multidimensional poverty measure], of course, there is a huge and intense discussion between INEGI, the statistical office, and CONEVAL, the council, because we have to come up with implementation of these definitions. So it’s not only important to be conceptually rigorous, but it also has to be feasible to be applied on the ground.”
“Right now we are almost at 10 years of this measurement, and CONEVAL is going to redefine the methodology. The law has upgraded some of the rights—so, for instance, the level of education has gone beyond primary that is mandated by law to secondary level—so that is something that has to be included into this measure.”

Juan Daniel Oviedo Arango, Director General, National Administrative Department of Statistics (DANE), Colombia:
“The MPI is measurement for action because, at the first glance, we use the MPI as an accountability platform of how social policies are going to improve life quality conditions of our citizens.”
“The MPI not only was used as an accountability platform but also as a strategic policy designing instrument. So all the socio-economic policy of our government turned around the MPI.”
“The MPI is also a very good example in our country of good governance. An MPI needs rigour and independence in the measurement because it cannot be just a government-biased indicator, but it has to be really independent.”

Nour Goukouni Nour, Director General, National Institute for Statistics, Economic and Demographic Studies (INSEED), Chad:
“For a better evaluation of the Sustainable Development Goals, and especially to have information to feed into the 2017-2021 Five-Year Plan, it is important to develop socioeconomic indicators that can capture, from many angles, the indicators of poverty in a multidimensional approach.”
“The results of the MPI will provide the Government with the necessary information to better guide public policies in measuring poverty and well-being, to geographically target vulnerable groups, to monitor and evaluate poverty reduction, and to monitor SDG indicators.”

Mohd Uzir Mahidin, Chief Statistician, Department of Statistics, Malaysia:
“In line with the introduction of the MPI in the 2010 Human Development Report, Malaysia has developed a national measurement of MPI that is appropriate to the socio-economic well-being and development framework of the nation. The use of the MPI will ensure that policy evaluation will shift beyond poverty to include vulnerability as well. The MPI will complement the BLI measure and monetary poverty from a multidimensional perspective.”
“The MPI we compute reflects both the incidence of multidimensional poverty deprivation, as well as the intensity.”

Ariunzaya Ayush, Chairperson, National Statistics Office, Mongolia:
“In 2017, Mongolia conducted a pilot survey and covered three counties. We tried to measure the MPI in four dimensions, having Education; Health; Housing conditions; and Standard of living. … We understood that we had to organise discussions on selected indicators between multi-stakeholders in the government to see which indicators we need. So we are working now with the World Bank on projects, taking deeper surveys on nomadic households and we also have an ADB project which is working on SDG indicators, and especially working on Multidimensional indicators”.

Camilo Simão Ferreira de Ceita, Director General, National Institute of Statistics, Angola:
“… what we need to do is come up with our own definitions for our own MPI, so we started the process with OPHI’s support through a national consultation to define the dimensions and the indicators. We think the dimensions will be Health; Education; and Standard of Living. We count on the support of Statistics South Africa, they have a lot of experience in this issue, and of course on OPHI to give us support and I think it will happen in May. I think this will be a revolution about poverty in Angola”.

Abdella Zidan Allag, Chairman, Bureau of Statistics and Census, Libya:
“We took an opportunity because there was a survey done in 2016 and we used that data to measure the MPI for Libya. We concentrated on three dimensions – Work and Education as one dimension; Health; and Living Standards. The values from this index are reliable because when we go through them, they show the truth of poverty in Libya. This report has succeeded in providing indicators we can rely on because we didn’t have a measure before, so this is a great opportunity for us to have indicators to assess the first goal of the SGD’s”.

Palestine Central Bureau of Statistics:
“In 2014, we started working on the MPI with the national committee in Palestine and with consultants from ESCWA. We also conducted the households consumption and expenditure survey in 2016/2017, and we also have the census 2017 – we are working on the MPI using the big survey and the census. The National Policy Agenda 2017-2022 highlights “Putting Citizens First”, and in response to that, we are working to have Multidimensional variable design besides the income line”.

Babacar Ndir, Director General, National Agency of Statistics and Demography (ANSD), Senegal:
“In Senegal the MPI was developed by the Observatory of Quality and Living conditions. The Observatory is an association of government and statisticians – like Ministry of Economy, the ANSD, Ministry of Social Development, Social Economy and so and so. Also, the private sector and civil society. And this framework has been put place to better take into account the implications of the MPI in public policies. The process of developing the MPI has followed different steps suggested by the Alkire-Foster methodology.  The steps are as follows – first was to analyse the existing situation. The second step was to set the units of identification, and the third is to choose MPI parameters. And this choice developed slowly, and 5 dimensions were selected – Education; Health; Reading Conditions; Employment; Governance and Institutions”.

Imelda Madgalene Atai, Acting Executive Director, Uganda Bureau of Statistics:
“The analysis of the MPI is based on the 2016/17 Uganda National Household Survey (UNHS 2016/17), UDHS 2016, and the UNPS. The Alkire Foster (AF) methodology is adopted in the estimation of multidimensional poverty at national, rural/urban and sub-national levels (Alkire and Foster, 2011). The AF framework employs the dual-cut off approach (deprivation cut off and poverty cut off) to identify the poor.  For the Uganda MPI, a household (and all its members) is considered poor if they fall short or is deprived in 40 percent of the weighted dimensions”.

Sabina Alkire, Director, Oxford Poverty & Human Development Initiative, University of Oxford:
“Dimensions and indicators for Poverty Include: Education, Health, Living Standards, Empowerment.
Some countries launched their National MPI’s in 2018 and are not here, like Nepal. And also, Child MPI’s like Panama. Also, in 2019, Sierra Leone, the President, released their National Development Report with their National MPI last week – so that’s the first of 2019 and there will be more countries launching official MPI’s in 2019.
The MPPN works mainly on national statistics, but also with many agencies – and national MPI’s are permanent official statistics like a monetary measures – which both reflect poor peoples’ experiences and also reflect the policy priority, including the SDG agenda at the national level. So we are very happy that to support this with UNDP we are releasing a new book shortly – it will be online – ‘How to build a National MPI’ – It has both the statistical process and the policy process in the same book”.
Sabina Alkire’s PowerPoint presentation can be downloaded from here.

See the photos of the event here.