You are here: Home » Multidimensional Poverty Index Launched in Honduras 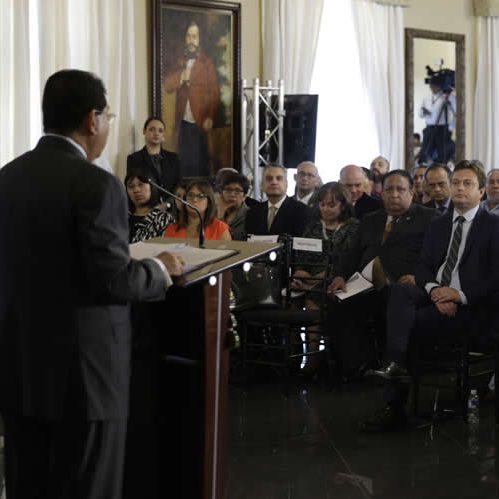 On 23 August, 2016, Honduras officially launched a national Multidimensional Poverty Index (MPI) at an event at the Presidential House in Tegucigalpa. Over 200 people from government, academia, civil society, the private sector and the international donor community attended the launch.  First Lady Ana García de Hernández expressed the strong interest of the President and the Government in using the new MPI-Honduras to create policies that will help fight poverty.  The Ambassador to the European Union, Mr. Ketril Karlsen, noted that creating the MPI-Honduras had been a two year process that the European Union had been glad to support and praised the Government for launching this new, useful measure.

OPHI Co-Founder John Hammock looked forward, stating that the real challenges would begin now—to implement the MPI-Honduras and coordinate Government policies and programs to combat poverty. Dr Hammock spoke of those who will benefit from this measure, stating that he hoped that in one year, three years, five years from now, poverty in Honduras would be lowered by using the MPI to make programs more efficient and effective.

Multidimensional Poverty Peer Network (MPPN) members Mexico and Colombia also gave presentations on their experiences using a national MPI to inform policymaking. Minister Tatyana Orozco, head of the Department of Social Prosperity of Colombia, emphasized the use of the MPI for targeting, for evaluation and for coordinating Government policies and programs of the various Ministries.

Minister of Government Coordination of Honduras, Dr Hernández Alcerro officially launched the measure and noted that the full presentation of results presented at the launch by Magdalena Garcia would be on the Government website in the coming week.

The goal of the measure is to improve the targeting and evaluation of public policies and help design and implement more effective policies. The MPI was built using the Alkire-Foster methodology developed at OPHI. The national MPI of Honduras consists of four dimensions (health, education, employment, and living standards) and 15 indicators. It was developed by a Technical Commission that included members from academia, the private sector, civil society and Government. The latter was represented by the General Secretariat of Government Coordination (SCGG), the National Institute of Statistics, the Office of Development and Social Inclusion, and the Ministry of Finance. OPHI provided technical support during the process.

Further information is available from the Government of Honduras (in Spanish).