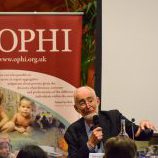 In 2013, the World Bank Group announced two defining goals to guide development work: to end extreme poverty by 2030 and to boost shared prosperity in every country. Later, in 2015, UN member nations agreed to a set of post-2015 Sustainable Development Goals (SDGs). The first and foremost goal is to eradicate poverty everywhere, in all its forms.

Motivated by a global shift in conceptualizing poverty, former World Bank Chief Economist Kaushik Basu convened the Commission on Global Poverty to advise the Bank on how to improve its practices and procedures for the measurement and monitoring of global poverty. Sir Tony Atkinson chaired the Commission and authored the final report, entitled Monitoring Global Poverty, which was released in October 2016.

The Oxford launch of the report on 4 November, 2016, was organized by the Oxford Poverty & Human Development Initiative (OPHI) and Oxford Martin School. The public forum began with a presentation by Sir Tony Atkinson, who provided the context to the report and reviewed the Commission’s recommendations and proposals.

In the first panel, James Foster expressed that he was broadly happy with the report, wearing both his monetary and multidimensional poverty hats, and gave evidence such as the Commission’s distinction between income and consumption data. As a statistician, Pali Lehohla highlighted the importance of not just lobbing good statistics over a wall for policy makers to find and use, but directly engaging the political dialogue. Natalie Quinn addressed issues of comparability across different countries and of measuring the depth and intensity of poverty. Robert Allen took on the vexed issue of PPPs in a balanced but detailed way, noting the presence of errors and poor data quality in the International Comparison Project. Sabina Alkire celebrated the report as a teaching resource as it skillfully joined disparate literatures – national accounts and survey data, European and developing country poverty, absolute and relative elements, total error, counting approaches etc. In conclusion, Achim Steiner summarized points on monitoring poverty.

Commencing the second discussion, Denise Lievesley shared a riveting presentation submitted by the President of Colombia, Nobel Laureate Juan Manuel Santos for this occasion, outlining Colombia’s use of multidimensional poverty statistics to successfully confront poverty and thanking Sir Tony for the Report. Subsequently, Dean Joliffe presented the World Bank’s response to the Atkinson report. Stefan Dercon observed the report omitted ‘sterile’ debates, yet steered a reasonable course through issues that can be overly passionate among experts, and in so doing squarely addressed the policy context that motivated it, even if not all its insights were yet being accepted. Mihika Chatterjee used field studies from her doctorate to motivate her call for frequent and systemic data collection on nonmonetary dimensions in nutrition, personal security, and employment. Duncan Green underscored participatory definitions of poverty grasped in the landmark “Voices of the Poor” study.

At the conclusion of the event, Sir Tony Atkinson briefly discussed five final points regarding the study and measurement of poverty: the importance of understanding the geographical context, the need for an appreciation of environmental issues, the relevance of the study of child poverty, the historic role of the welfare state in reducing poverty, and the continuing need for external scrutiny of the World Bank.

Highlights from the prominent guests included:

Message, read by Denise Lievesley, on behalf of: