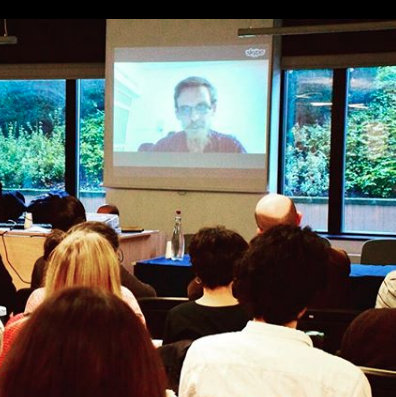 Jean Drèze, development economist, activist, and professor at Ranchi University (India) has come out with a new book entitled “Sense and Solidarity: Jholawala Economics for Everyone.” Drèze joined remotely to discuss his book on 24 November at the Oxford Department of International Development. A video of the event is available here.

This book, a collection of essays and articles from research and activism during the last decades provides a perceptive and rigorous look into India´s economic and social development, child health, elementary education and gender (in)equality. Drèze, the co-author of several books with Nobel laureate Amartya Sen, explains that social development should be seen as “the endeavour to create a good society.”

The book is available here.

The book launched on the 24 November 2017 began with a video on Aadhaar authentication and its impact on India’s poor. Drèze followed this with a discussion about the themes of his book, including the relationship between research and activism and the state of pro-poor activism in different sectors in India.

Professor Matthew McCartney, Director of South Asian Studies at the University of Oxford further expanded on the connections between high-quality research and policy impact and the responsibilities of academics. Dr Duncan Green, Senior Strategic Advisor at Oxfam GB likened Drèze to Orwell, given that the book covers some of the most interesting social change episodes in recent Indian history — changes in which Drèze participated. Describing Drèze as “fascinated by details that matter” and “steely but not shrill”, Green challenged the audience to consider a biography. DPhil candidates Soumya Mishra and Amogh Sharma shared their reflections on the book, with Mishra exploring new angles on Aadhaar authentication and migration and Sharma discussing the difficulty of generating the political will necessary to turn research into action.

The floor was then opened for questions from the audience, a packed crowd, many of whom stayed past the intended end time to continue listening to and engage with Drèze. The event was moderated by Sabina Alkire, Director of OPHI.

Inside cover of Sense and Solidarity:

Jean Drèze has a rare and distinctive understanding of the Indian economy and its relationship with the social life of ordinary people. He has travelled widely in rural India and done fieldwork of a kind that few economists have attempted. This has enabled him to make invaluable contributions not only to public debates on economic and social policy but also to our knowledge of the actual state of the country.

Drèze’s insights on India’s “unfashionable” issues – hunger, poverty, inequality, corruption, and conflict – are all on display here and offer a unique perspective on the evolution of social policy over roughly the past two decades. Historic legislations and initiatives of the period, relating for instance to the right to food and the right to work, are all scrutinised and explained, as are the fierce debates that often accompanied them.

“Jholawala” has become a disparaging term for activists in the business media. This book affirms the learning value of collective action combined with sound economic analysis. In his detailed Introduction, Drèze persuasively argues for an approach to development economics where research and action become inseparably interconnected.

This is a book as much for economists as for every reading citizen.

Reviews of Sense and Solidarity:

“Jean Drèze is one of the world’s finest development economists. He works in a space that is widely but incorrectly ignored by most. The practical implications of evidence-based economics cannot be worked through without engaging all of society in democratic discussion, including (especially) those who are working for change. Economics itself fails without that engagement. In this collection of beautiful essays, some previously unpublished, Drèze uses economics, philosophy, and his extensive practical experience to illuminate the whole range of social policy in India. Read on!”
ANGUS DEATON, Nobel Laureate, Economic Sciences, 2015

“Beautifully produced, with a catchy and moving introduction…this collection is a pleasure to read. Drèze writes elegantly and passionately, shorn of rhetoric, arguing that we see India from the lens of the marginalised”
ASHWINI DESHPANDE, Professor of Economics at Delhi University, in the Indian Express

It is this combination of passion and humour, of sincerity and argumentativeness, that makes Jean Dreze’s book such a compelling read. You may not always agree with the happy warrior, but you have to engage with him. Besides, he is good company!
Maitreesh Ghatak, Professor of Economics at the LSE, on NDTV

“The essays make a rich contribution to several ongoing debates… The right-based schemes, the debates regarding universal basic income and formulation of public policy through a democratic process owe a huge intellectual debt to the jholawalas, of which Jean Dreze is a giant. It is unfortunate that governments have been shutting down skylights, windows and doors to ideas and inputs from outside. Challenges faced by India are too complex to be resolved from fortresses atop Raisina Hill. History bears testimony to that”
Sunil Bahri reviews SENSE & SOLIDARITY in Outlook