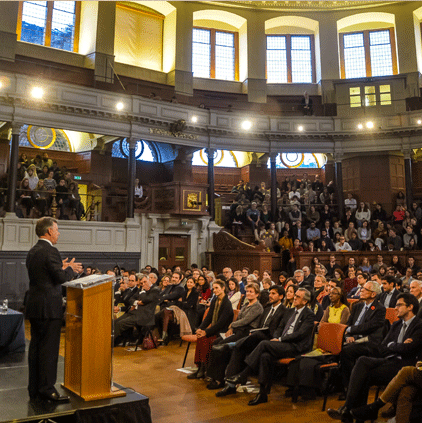 Former Colombian President and Nobel Peace Laureate Juan Manuel Santos began a three-year Visiting Professorship at ODID this month with a Distinguished Public Lecture, in which he shared his experience of negotiating peace and pursuing poverty reduction in Colombia, and with a series of informal meetings with academics and students.

During his Visiting Professorship, Professor Santos will conduct independent work on poverty reduction and peace building with the Oxford Poverty and Human Development Initiative (OPHI) at ODID, as well as via interaction with the vibrant academic community of the department and University at large.

Professor Santos delivered the lecture, titled ‘Reducing Poverty and Building Peace in Colombia: Inextricably Linked Processes’, on 12 November at the Sheldonian Theatre. In the lecture, he outlined the circumstances that inspired him to pursue peace negotiations with FARC rebels in Colombia, as well as the conditions he sought to create that would make the process possible. He also spoke about Colombia’s experience of implementing a Multidimensional Poverty Index (MPI), developed with OPHI, as part of the process of building peace after the negotiations were complete.

President Santos also took part in a series of informal meetings with academics and students as he began his professorship.

He attended a round table chaired by ODID Head of Department Christopher Adam during which a group of academics working on peace, poverty and the environment shared their research agendas.

He also held informal discussions with a small group of students from ODID and the Blavatnik School of Government on topics that the students themselves raised.

In addition, he took part in a 30-minute Q and A with students during a class on the Sustainable Development Goals, which Colombia played a pivotal part in shaping, and in which their MPI has a visible place. The class was part of the MPhil in Development Studies’ module on Poverty and Human Development, led by OPHI Director Sabina Alkire.

The Latin America Centre also hosted a showing of the documentary, Port of Destination: Peace, about the Colombian peace process.

Professor Santos was awarded the Nobel Peace Prize in 2016 for ‘his resolute efforts to bring [Colombia’s] more than 50-year-long civil war to an end’.

During his term in office, which has just closed, Professor Santos took leadership in global efforts to reduce multidimensional poverty, including co-founding the Multidimensional Poverty Peer Network (MPPN), a South-South initiative of policy-makers working to fight poverty in all its forms and dimensions, launched in Oxford in 2013 by its Secretariat, OPHI.

See some photographs from the events in OPHI’s Flickr galleries: