You are here: Home » Reflections on wellbeing as it evolves in Bhutan – Dasho Karma Ura visits OPHI 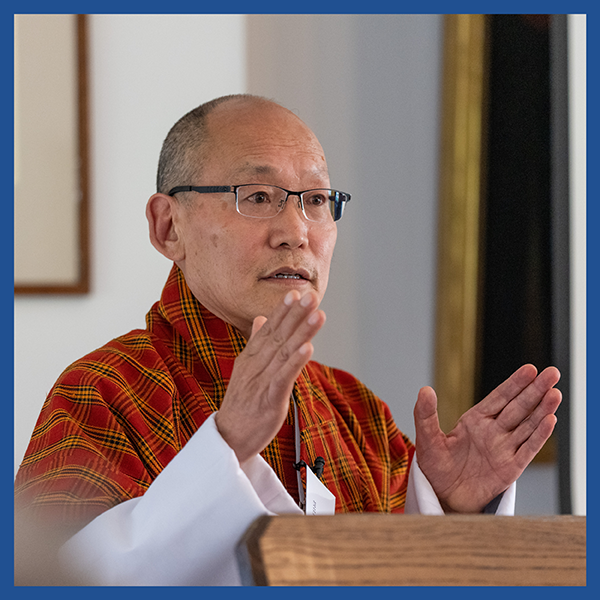 27 June 2022 – OPHI is grateful for the opportunity to have hosted and exchanged with Dasho Karma Ura, President of the Centre for Bhutan and Gross National Happiness Studies (CBS), over the course of his Visiting Fellowship which extends from April to July this year.

Dasho Karma Ura was instrumental in devising the concept, structure and policy uses of the Gross National Happiness (GNH) Index in Bhutan, including formulating the nine domains of GNH (Psychological wellbeing; Health; Education; Time use; Cultural diversity and resilience; Good governance; Community vitality; Ecological diversity and resilience; and, Living standards). He has led innovations such as Bhutan’s GNH Certification for Businesses, and is renowned as a planner, teacher, economist, painter, religious scholar, poet, novelist, and choreographer. He is a member of several international boards and working groups including the Advisory Board of the Wellbeing Research Centre at the University of Oxford, the Earth Trusteeship Working Group (ETWG), the Global Happiness Council in the UAE, and the World Happiness Report. A former alumnus of the Magdalen College, he is an Honorary Member of its SCR.

During his fellowship at OPHI, Dasho Karma Ura participated in several events and meetings including a pre-launch of his two-volume OUP book The Unremembered Nation – Bhutan, which explores the community, art, development pathways and ideals of Bhutan. Dinah Rose, Magdalen President, Sir Simon Bowes Lyon KCVO, President of The Bhutan Society of the UK, Professor Ulrike Roesler, Professor of Tibetan and Himalayan Studies at the University of Oxford, and Sabina Alkire, OPHI Director, joined Dr Ura to discuss his extraordinary human-centred and sensory account of everyday life.

During the inaugural Oxford Policy Engagement Network (OPEN) showcase run by the University of Oxford, Dasho Karma Ura offered a keynote address discussing development policy and wellbeing with OPHI Director, Sabina Alkire. Dr Ura shared preliminary observations from new qualitative interviews of Bhutan’s rural and often elderly inhabitants undertaken this year by the Centre for Bhutan and GNH Studies. The purpose was to engage in ‘deep listening’, asking open-ended questions of respondents to understand the lived well-being experience of the population and identify priorities for future policies. Dr Ura explained how the study is drilling down into each person’s reflections to understand the relative importance of aspects of wellbeing for that person, to flesh out the quantitative picture with case studies. Dr Ura’s insights surfacing from a first look at early results which only became available last week, included a widespread concern for water availability – initially surprising to Dr Ura’s team – and a shortage of rural labour as birth rates decline and young people move away.

Sabina Alkire bookended the keynote address by explaining Karma Ura’s earlier work on the structure of the GNH Index and how it helps guide policy formulation and evaluation in Bhutan, and how its private sector engages to advance well-being. In the Q&A that followed, conversations ranged from how perceptions of wellbeing are shifting in Bhutan in terms of dietary preferences, beliefs and technology; whether and how one could measure the freedom to choose one’s own life course in GNH; and, the migration of young people away from villages to towns, with Dr Ura expanding on his ideas of investing in villages to incentivise generations to consider staying and living sustainably.

During his Visiting Fellowship Dr Ura also advanced a massive and unprecedented study on the Buddhist foundations of wellbeing. The study probes the entire Triptyka or Kanjur (set of Buddhist texts) – whose words, he discovered, number 24 million – to ascertain which domains of human wellbeing they envisaged, and how the value of those domains was articulated 2,500 years ago. This work is likely to be shared in a book and journal articles, published in both English and Dzongkha.

Meanwhile, the 2022 GNH survey is in the field. Like many other organisations, CBS hit the pause button when the pandemic intruded. In an international context troubled by climate change and economic pressures, when non-monetary wellbeing is wistfully prominent on the agenda, Dr Ura, his colleagues, and OPHI have been discussing how to analyse incoming data with the latest methodologies. The aim is to analyse GNH in ways that are relevant for Bhutan – a least-developed country whose tourist economy has been deeply gouged by the pandemic – and also for other nations with similarly shy hopes to advance profound and widespread wellbeing despite constrained fiscal resources.

Photo by Callum Keith for OPHI.