You are here: Home » “Changing World: Addressing Multi-Dimensions of Poverty and Inequalities” 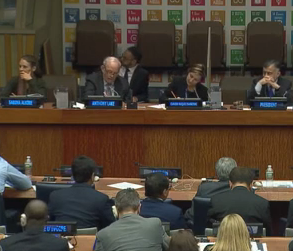 The theme of the United Nations’ High Level Political Forum for Sustainable Development this year is eradicating poverty in all its forms and dimensions. On July 10 a session on multidimensions of poverty and inequalities took place.

Colombia’s Director of Economic, Social and Environmental Affairs of the Ministry of Foreign Affairs Claudia Vazquez and Executive Director of UNICEF Anthony Lake joined Director of OPHI Sabina Alkire on the panel. High Commissioner of India to Canada and noted novelist Vikas Swarup was the moderator for the session.

Laura Stachel, founder of WeShareSolar and WeCareSolar, and Emem Omokaro, Executive Director of The Dave Omokaro Foundation and LEADS Scholar, National Universities Commission, were the lead discussants. Presiding Officer of the session was Nabeel Munir, Deputy Permanent Representative of Pakistan to the United Nations and Vice-President of Economic and Social Council. 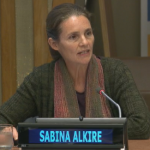 In a book called “Numbers that move the world,” Miguel Szekely observed that at points, numbers can motivate action. They can mobilise reluctance. They can ignite policies, generate discussion, and even in some points end a pressing problem.

We are here this week to talk about different policies that as Elixia Bartonize said, address the inter-institutional, intersectorial and interconnected aspects of poverty effectively and so no one is left behind. And yet our instruments of measurement for doing so are multiple, and so the question is how do these measures inform action. And the answer is evident, it’s governance. They must analyse this new evidence base, and mobilise it into action. But that’s quite a bit of work. What I’d like to do is introduce Multidimensional Poverty Indices, or MPI, which takes a set of poverty related indicators from different SDGs that vary by country, and link them together, at the individual level and as a statistic that gives one headline figure, but then can be unpacked to inform policy.

What I’d like to do is to think about the kinds of numbers we’d need, to push the agenda on poverty in the SDGs. The MPI is not a silver bullet. There is no silver bullet for ending poverty. But numbers can move the world. And governments who are committed and passionate have found multidimensional poverty indices to be more than statistics, to be tools for governance and accountability. Not only them, but NGOs, businesses and other actors. And our hope, is that in learning with you and in dialogue with you, this movement can go forward.

Claudia Vasquez Marazzani, Director of the Economic, Social and Environmental Affairs, Bureau of the Ministry of Foreign Affairs of Colombia 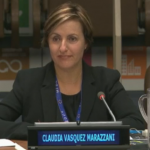 Colombia introduced the MPI with the aim of making clear and demonstrating which factors needed to be taken into consideration if we were to improve the decision-making process at a public policy level, what the authorities have to take into account. The MPI makes it possible for the country to pinpoint the needs, the most visible needs which need to be tackled, overcome and met indeed if we were to properly focus the work of programmes and plans which need to be implemented at the national and territorial level.

So what has this MPI hass done? It’s made it possible for us to better focus on the needs across national territory. And the MPIs also demonstrated that we need to invest more public resources in specific sectors and regions. That’s what it’s allowed us to see.

The MPI has also allowed us to improve our information systems. We’ve got an instrument called the “Master Key”, and it’s an instrument that’s allowed us to have one information system which groups together the old national records, and that means that thanks to this MPI, this index, we are better able to properly monitor the sectors of the population which are, and which need to receive proper care, so that we avoid duplicating our efforts. And we are better able to see which sectors of the population are not receiving the help they need. So we can help them.

I just want to say that in recent years, Colombia has seen that the MPI has been, undoubtedly the most effective and efficient tool that we have to coordinate better the states’ work in the country and better focus it on those in need. 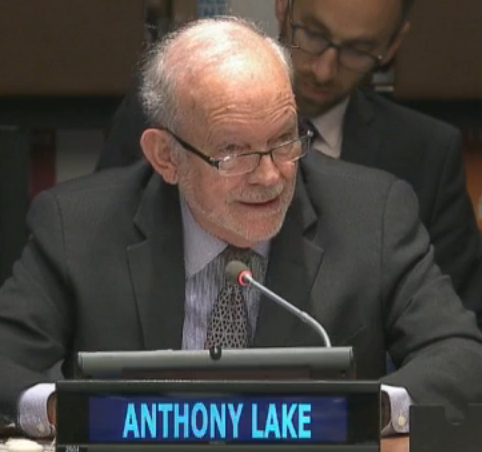 Building the future envisioned in the Agenda 2030 requires tackling many interrelated and interlocking drivers of poverty as found throughout the Sustainable Development Goals.

Poverty is disproportionately about children. They comprise nearly a third of the world’s population, but half of all of the multidimensionally poor people. As the Oxford Poverty and Human Development Initiative reminds us in its shocking new report, “over two thirds of poor children live in middle-income countries”. A reminder of why the Convention of the Rights of Child and UNICEF’s mandate, cover all children everywhere.

Countries are increasingly working with NGOs, UN agencies and the World Bank to establish and use multidimensional measures of poverty. We heard about Columbia’s great progress in this.

The work of partners like the Oxford Poverty and Human Development Initiative whose new reports shines a disturbing but necessary light on the multiple challenges that so many children face. 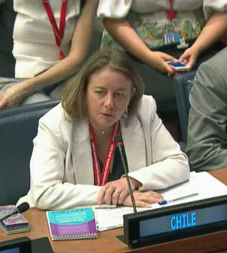 Chile is deeply committed to the integrated, indivisible nature of Agenda 2030 and the 17 SDGs. Against this backdrop, we believe that it is crucially important to have a multidimensional poverty measure which complements the measurement of poverty by income. It is important to design and implement public policies which make it possible to fulfill the goals established and the targets which form part of the 17 SDGs–and of course comply first and foremost with SDG 1–that is to eradicate poverty in all its forms and dimensions.

…In Chile, we have committed to a programme under President Bachelet and since 2015, we have been measuring poverty by income, and it’s updated and looked at in [terms of] consumption patterns, but complementing that we have looked at poverty in a multi-dimensional fashion. And this model, this multi-dimensional model, has been drawn up with the support of civil society, ECLAC, and academia.

We have measured poverty in a multi-dimensional fashion looking at five dimensions of well-being: education, health, work and social security, housing, and the environment. So we’re not simply looking at housing in terms of how easily it can be accessed and how easily basic services can be accessed and how habitable a dwelling is. We’re looking at how close this dwelling is to basic public services such as health care, education, and public transportation. Moreover, we evaluate whether or not housing is close to contamination–sources of pollution–for example, polluted water, or improper sanitation mechanisms. And now a fifth dimension of multi-dimensional poverty, which we measure, is networks and social cohesion. Normally these are overlooked in measuring poverty but are fully acknowledged as important dimensions of poverty by many, because often people are victims of discrimination, become the victims of drug trafficking, etc., etc. So it’s important to look at social integration as a dimension of poverty. 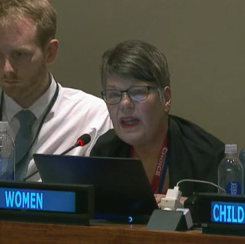 Joanne Crawford, from International Women’s Development Agency, speaking on behalf the women’s merger group today…In its call to end poverty in all its forms everywhere, the wording of [SDG] Goal 1 implicitly recognizes the need to end multi-dimensional poverty. The MPI has made an enormous contribution to our understanding of poverty beyond money and generating a Multi-dimensional Poverty Index from existing data. But use of existing data also brings its limitations. Addressing this data limitation must be a core priority. 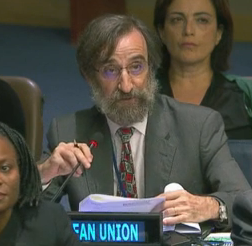 Eradicating poverty, tackling discriminations and inequalities, and leaving no one behind are at the heart of the EU development cooperation policy. …It is not coincidence we have good examples of the Multidimensional Poverty Index coming from middle-income countries. 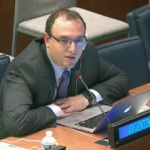 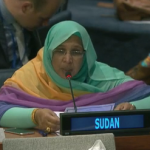 There is a lack of data which is due in part to the different understandings of poverty in our countries. There’s income poverty, there’s multidimensional poverty. …. And we … hope that these indicators will be able to have an impact regionally and internationally, and give us the evidence that we need so that everyone can benefit from efforts to eradicate poverty. When you take an instant snapshot of poverty, of course you realize that there are many dimensions of it, but these dimensions are inter-connected amongst themselves–cause-effect relationships among a number of these items or dimensions. We don’t treasure what we don’t measure.

…The multidimensional nature of poverty requires us to go beyond economic growth. The economic system needs to view the economy as a subset of the environment and society, not the other way around. 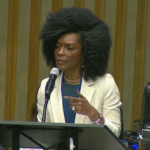 When we are doing the survey for the MPI, you are getting the poor, the people who are affected, to describe their core deprivations, because you don’t know it. 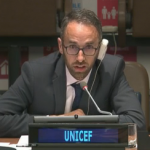 We are at an interesting point today, where thanks to Sabina and others’ work, these [multidimensional poverty] measures have been largely accepted in many countries and have achieved real traction…

The whole point of multi-dimensional poverty measures is to respond to the myriad ways in which poverty is manifested. 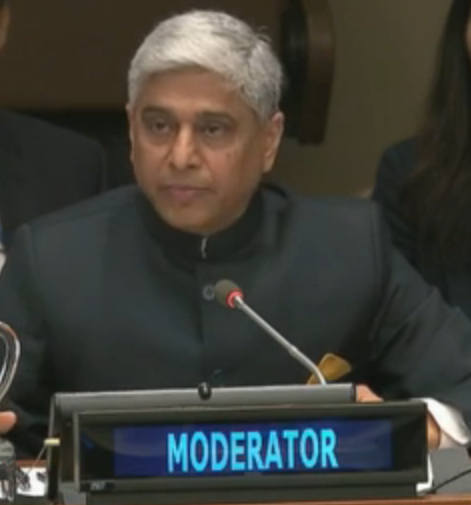 Multidimensional Poverty Indices based on the solid evidence of household’s own deprivation profiles provide a clear monitoring framework and are powerful tools for policy. Many countries are already reporting or intend to report a multi-dimensional poverty measure using [OPHI’s] counting technique for the SDG’s, and the Multidimensional Poverty Peer Network now has 53 participating countries and 12 agencies creating a South-South space for leadership and cross-learning.

Let’s not be moderate. Let’s be bold. Let’s finish what we started. We are living in the most transformative period of human history. Technologies that once existed only in science fiction are beginning to show up in our homes and our workplaces, enabling us to meet basic human needs on a scale unprecedented in history. The geography of poverty is no longer contained to one region of the globe, and the poor are no longer an undifferentiated mass. Now it is a problem of identification, targeting, and distribution, and that is a problem that can be solved. As Mandela said, overcoming poverty is not a task of charity; it is an act of justice. We now have a clear goal: ending poverty in all forms and dimensions by 2030. We have a plan in the form of the Sustainable Development Goals. We have the tools in the form of the MPIs. All we need now is the will to execute that plan to making poverty history.