You are here: Home » Bhutan cuts poverty by roughly half in five years

Bhutan cuts poverty by roughly half in five years 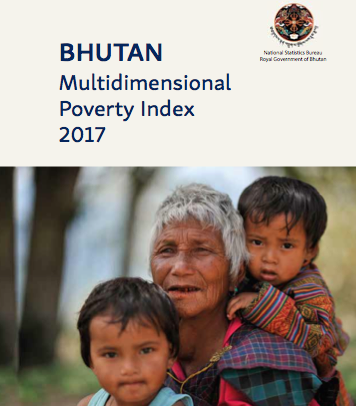 29 December 2017 – In the last five years, Bhutan cut multidimensional poverty by nearly half, according to a new report unveiled today in the country’s capital, Thimphu. The report is the first update of Bhutan’s national Multidimensional Poverty Index since 2012, and was developed by the National Statistics Bureau and Oxford University’s leading centre on multidimensional poverty, Oxford Poverty & Human Development Initiative (OPHI).

Over a decade, the numbers show an even larger reduction: an 80% decline in poverty, with the national MPI falling from 0.160, in 2007, to 0.023. The Bhutan MPI monitors 13 indicators, such as food security, low education and inadequate sanitation, distributed across three dimensions: health, education and standard of living. And there were significant reductions in each indicator.

“Overall, the 2017 MPI paints a picture of lightning-fast progress, with MPI reducing by far more than half from 2007 to 2017 and by roughly half since 2012, with rural areas progressing rapidly,” said Mr. Chhime Tshering, Director of the National Statistics Bureau.

To calculate the MPI, the authors used data from the 2017 Bhutan Living Standards Survey. This provides an up-to-date national headline, with details by Dzongkhag (district), by rural and urban areas, and other characteristics. The UNICEF country office provided welcome support for the report and launch.

The MPI complements income measures, providing an in-depth picture of poverty, which helps governments to develop and implement efficient public policies. In the case of Bhutan, of the total population, 5.8% are MPI poor and 8.2% are poor according to income indicators. Only about 1.0% of Bhutanese are poor by both measures.

“In the five years since the previous update, Bhutan’s MPI has become a strong instrument for resource allocation, targeting, and policy design, complementing Bhutan’s monetary poverty measure,” added Mr. Tshering. “Both measures are needed to adequately illuminate poverty in its many forms and dimensions.”

In 2010, Bhutan became the first country to launch a Multidimensional Poverty Index applying the Alkire and Foster MPI methodology from the University of Oxford – the same methodology used in Bhutan’s Index of Gross National Happiness (GNH). Now, a South-South Multidimensional Poverty Peer Network (MPPN) has 53 participating countries who are exploring, developing, or have already launched an MPI as an official national statistic. In June 2017 Panama and the Dominican Republic launched their first official national MPIs, and the most recent national MPI was launched in Nepal earlier this month.

According to the new report, among the 13 MPI indicators, the largest contributors to national poverty in Bhutan are deprivations in years of education (32%), followed by child mortality (23%) and school attendance (13%). When the MPI is disaggregated by age group, the numbers show that multidimensional poverty is highest for children under the age of 9, of whom 7.1% are poor.

For OPHI Director Dr Sabina Alkire, Bhutan’s strides in fighting multidimensional poverty are inspiring. “By reducing MPI by much more than half from 2007 to 2017, Bhutan has shown that rapid change is possible. For those countries who are trying to meet the Sustainable Development Goal target of halving MPI by national definitions between 2015 and 2030, Bhutan’s example will be encouraging.”