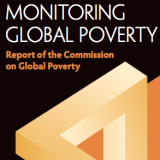 OPHI lauds both the new report on poverty measurements and the Bank’s cover note introducing it.

The Report received its Oxford launch on the 4th November at the Oxford Martin School when Sir Tony Atkinson spoke. This event was broadcast live here.