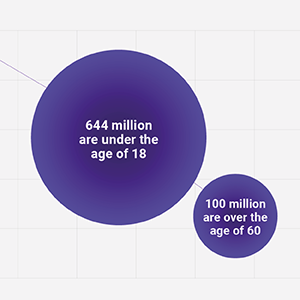 16 July 2020 – The 2020 global Multidimensional Poverty Index launches today. New figures released by the Oxford Poverty and Human Development Initiative (OPHI) and the United Nations Development Programme (UNDP) show that before the COVID-19 pandemic hit, progress was being made in tackling multidimensional poverty. Now – without decisive action – that progress is at risk.

2020 marks the ten year anniversary since the global MPI was first launched in partnership with the UNDP’s Human Development Report Office (HDRO). This year’s joint report provides a comprehensive overview of multidimensional poverty in the developing world.

The report explores if countries, before the pandemic, were on track to halve their multidimensional poverty if observed trends continued, finding that 47 out of 75 countries were on track.

In the context of COVID-19, the report offers simulations of the possible impacts of the pandemic on the global MPI. While data are not yet available to measure the rise of global poverty after the pandemic, simulations based on different scenarios suggest that, if unaddressed, progress across 70 countries could be set back 3–10 years.

A decade away from the targets of the 2030 Agenda for Sustainable Development, the report concludes with an in-depth analysis of multidimensional poverty from the perspective of a selection of SDGs.

Findings from the report will be discussed live online at 4.30pm today BST in a ceremony chaired by Achim Steiner, the Administrator of UNDP. The event will feature high-level speakers from Bangladesh, Panama, the UN, the World Bank and the World Health Organisation.

About the global MPI
The global MPI is a measure of acute multidimensional poverty covering over 100 countries in the developing world. It complements global monetary poverty statistics, such as the $1.90 a day measure, by capturing more information on the nature of people’s poverty. It measures the acute deprivations in health, education, and living standards that a person may face simultaneously. The global MPI issues headline statistics for each country that can be unpacked to show who is poor and how they are poor, all of which is vital for informed policy reduction policies.

Media enquiries
Please contact maya.evans@qeh.ox.ac.uk in the UK; anna.ortubia@undp.org in the US.