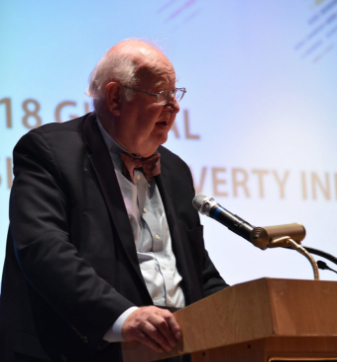 On 20 September at UN Headquarters in New York, the 2018 global Multidimensional Poverty Index (global MPI) results were launched. The event was hosted by UNDP Administrator Achim Steiner. He was joined by Nobel Laureate Sir Angus Deaton, OPHI Director Sabina Alkire, Acting Vice President at the World Bank Akihiko Nishio, Assistant Secretary-General at UN DESA Elliott Harris, Executive Director of CESR Ignacio Saiz, HDRO Director Selim Jahan, and OPHI Research Officer Usha Kanagaratnam. The event was live streamed on the OPHI and UNDP HDR websites. People tuned in from around the world to follow the live stream and participate in the global discussion on Twitter surrounding the launch of the updated global MPI.

In 2018, OPHI and UNDP undertook a joint revision of the global MPI, adjusting five of the global MPI’s ten indicators to better align the global MPI with the SDGs. With results covering over 100 countries, disaggregated by over 1000 sub-national regions, rural-urban areas, and age groups, the 2018 global MPI is particularly useful in identifying people who are left behind in multiple SDGs. It answers the call to better measure progress against SDG1—to end poverty in all its forms. As highlighted by Sabina Alkire during the event, the global MPI serves as a tool for policymakers to design efficient multi-sectoral, pro-poor policies.

The 2018 global MPI results include data for more than 100 countries, covering about three-quarters of the global population. Key findings include:

“The release of the [2018 global] Multidimensional Poverty Index is a critical moment because we believe that in understanding what is happening with poverty–extreme poverty, but also with the phenomenon of inequality–we are in desperate need of better understanding, better answers, and better insights as to how fundamentally divisive poverty and inequality has become in our societies.”

“We are all part of a learning community about how to translate an ever larger set of data and information about poverty.”

“The partnership that we at UNDP and the University of Oxford through OPHI have enjoyed, in not only working together to bring our competencies together, but also to develop a new methodological approach, and invent that in an ecosystem of other institutions working on this topic across the world, is a powerful expression of value added.”

“The story that we must bring to the world is that development can work, but as these numbers show us, it hasn’t yet worked in enough places or for enough people…Too many are still being left behind–actually 1.3 billion people according to the Multidimensional Poverty Index. But behind that, lie literally stories of hundreds of millions who have escaped poverty…as a consequence of deliberate, designed development interventions.”

“Sabina Alkire and her collaborators as well as UNDP are to be congratulated for this major contribution to global statistics and to the global poverty measurement. We also owe a debt to Amartya Sen, who has insisted for many years that economists were wrong when they measured well-being and poverty with an exclusive focus on income.”

“Multidimensional measures show a key advantage over the alternatives–what we might think of as a dashboard of measures… In the real world, deprivations in different areas are positively correlated with one another. It’s often–perhaps usually–the same people who lack resources who also lack education, or the sanitation and clean water that protects them against infectious disease… We cannot get our income data from one place and our health data from another; we have to have data that allow us to look at all of the dimensions for each and every person at the same time.”

“India’s amazing progress [in addressing poverty] in the last decade, especially for children, is one of the greatest triumphs of human and economic development. As the [2018 global MPI] report makes clear, there is still a long way to go before multidimensional poverty is eliminated in India, especially for men, women and children in the countryside. But at least for today, it is worth celebrating the 271 million people who escaped multidimensional poverty in the decade after 2005-6.”

“One of the greatest advantages of the SDGs over their predecessors, the MDGs, is that the former, unlike the latter, encompass the whole world, not just the poor countries of the world. Even the World Bank now calculates its $1.90/day poverty measure for rich countries, including the US… There are more globally poor people in the US than in Senegal, or in Nepal, and the poverty rate in the US is almost identical to the poverty rate in China, in spite of the fact that the US has a GDP per capita that’s three-and-a-half times larger… It’s a matter of urgency to extend the multilateral poverty work to the United States, and to help Americans understand just how badly they are doing by their poorest citizens.”

Video of the global MPI 2018 launch is available here.

More details on the results of the 2018 global MPI here.