You are here: Home » Special Side-Event at the 69th UN General Assembly 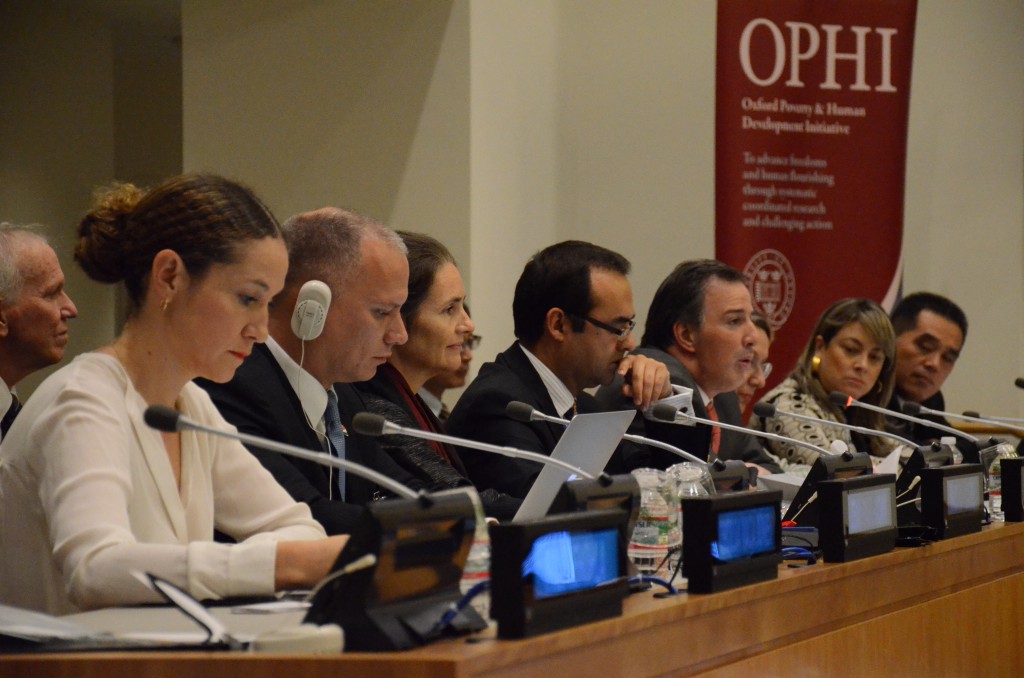 At a high-profile side-event attended by approximately 300 people at the 69th UN General Assembly, senior leaders from eight governments and institutions called on the UN to adopt a new multidimensional poverty measure to support the eradication of poverty in all its forms in the post-2015 development agenda.

Together officials from nations as diverse as Mexico, China, South Africa, Colombia, Ecuador and the Seychelles proposed that the next round of global development targets – the Sustainable Development Goals (SDGs) – should incorporate a new Multidimensional Poverty Index (the MPI 2015+).

The distinguished panellists outlined how such a critical innovation would support efforts to ensure that globally we “end poverty in all its forms everywhere” – the first goal of the Open Working Group on Sustainable Development Goals final Outcome Document (19 July 2014). They illuminated how a comparable and global MPI 2015+ could complement income poverty measures by shining a high-resolution lens on poverty, showing who is poor and how they are poor, helping to ensure that the SDGs “leave no one behind”. To make the comparisons universal they called for the new MPI2015+ to have two levels: one reflecting acute multidimensional poverty, and another of moderate povertyor vulnerability.

Many of the governments represented showcased national MPIs. Some are official statistics (for example Mexico and Colombia) which are used for an interlocking set of policy objectives; others are in policy use (China, South Africa) and others are under development (Ecuador, Seychelles) – that measure poverty and inform policies to eradicate it at the domestic level. Substantive interventions from Indonesia, Honduras, Costa Rica, and Nigeria introduced other measures that are under design, and how they will be used. The event thus demonstrated how national poverty eradication policies can be scaled up to the global level.

To show just how feasible it is to create this new measure, the event showcased proposals for a poverty data revolution in the form of improved household survey modules. These ‘light but powerful’ modules can help to collect more and better data on poverty across multiple dimensions such as education, health and nutrition, living standards, employment, and physical safety.

The event was co-hosted by the governments of Mexico, the Dominican Republic and Germany, and supported by the Government of Colombia and the Multidimensional Poverty Peer Network (MPPN) which brings together senior officials from nearly 40 governments and international and regional institutions.

The first speaker at the event, José Antonio Meade Kuribreña, Secretary of Foreign Affairs in the Government of Mexico, introduced Mexico’s national MPI and advocated for a global multidimensional approach to poverty reduction to be adopted at the international level, saying “we will not be able to defeat poverty unless we measure it correctly”.

The event chair, Gonzalo Hernández Licona, Executive Secretary of Mexico’s National Evaluation Council (CONEVAL), said that “It is essential for the UN to build on the work of national governments and the Human Development Report MPI to develop a new, robust global poverty measure as part of the new MDGs”, adding that Mexico strongly endorses the creation of multidimensional poverty measures at the national, local and especially global levels.

Sabina Alkire, Director, Oxford Poverty and Human Development Initiative (OPHI),  University of Oxford, then outlined how to build an MPI and how it is a high resolution lens. First, it provides a clear poverty headline. Second, it can be broken down in two ways – by region and by indicator – giving a detailed picture of how poverty is composed. Third, it brings into visibility different groups from income poverty, and reflects different policy successes. An MPI is able to monitor change and reflect effective policy interventions quickly, show the interconnected deprivations poor people experience, and enable policy coordination rather than a silo approach. CLICK HERE TO VIEW SLIDES.

Rebeca Grynspan, Secretary General of The Ibero-American General Secretariat, and former UN Under-Secretary-General and Associate Administrator of the United Nations Development Programme (UNDP), said that “we have known for a long time that income poverty can be misleading” and as such it is “vital to have a multidisciplinary approach to measure poverty”. She also highlighted how the development of a global MPI2015+ would “drive discussion and dialogue at the international level” and allow us “do things differently”. The MPI2015+ enables policy actors to “work with the poor” to bring forward sustainable change.

Jean-Paul Adam, Minister of Foreign Affairs, Seychelles highlighted the particular vulnerabilities of Small Island Developing States and the value that an MPI provides, complementing other economic statistics by capturing the difficulties unique to isolated nations. Development, he said, is more than about income – it aims at full and meaningful lives. For this reason multidimensional poverty measures are being actively explored in the Seychelles.

Minister of Social Development Cecilia Vaca Jones outlined Ecuador’s ongoing work to use an MPI within the framework of Good Living (Suman Causia), with which it fits naturally, to bring structural change. The MPI will target the most marginal for policies to reduce poverty and promote ‘good living’ implemented by nine sectors. Ecuador’s MPI, she explained, will help the government to comprehend the real needs of families and to use resources efficiently. CLICK HERE TO VIEW SLIDES.

Tatyana Orozco de la Cruz, Director of the Department for Social Prosperity of the Government of Colombia, gave a rich overview of the use of the MPI – which is an official statistic in Colombia – as a tool for coordinating better government policies to eradicate poverty. Drawing on these experiences, as well as recent innovations with child and indigenous MPIs, she said that: “Yes, poverty is about income. But it is also about the many social deprivations that the poor suffer every day. We cannot ignore this basic reality. We must adopt an international measure to help us keep track of how we are doing in the fight against poverty, to keep us accountable to the billions of poor people whose voices too often go unheard”.

Tan Weiping, Deputy Director-General, International Poverty Reduction Center, outlined how the Government of China is currently developing a national multidimensional poverty index as part of the country’s “war on poverty”. Observing, pragmatically, that “practice is the sole criterion for verifying the truth” he described how this year the government has identified 25 million MPI poor households, with 90 million poor people. Such an index, he stressed, has important policy benefits:

“A multi-dimensional index that measures poverty can determine more accurately among the poor population, the dimensions, indicators, and extent of poverty, as well as allow for better coordination among anti-poverty (government) departments”.

Internationally, Dr Weiping stressed the need for a global MPI “to guide the development of all countries”, remarking that since the announcement of the MPI in the 2010 UNDP Human Development Report “there has been a revolution in the field of poverty measurement, expanding the definition of what constitutes poverty, identifying perspectives, allowing a more realistic reflection of poverty”.

Pali Lehohla, Statistician General of South Africa explained how South Africa’s MPI (SAMPI) has been a critical tool in mapping the drivers of poverty in the country, highlighting the important role played by education in the country’s poverty levels and showing reductions in incidence and intensity over a decade in each locality. Such rich statistics, he stressed, help to improve transparency and accountability, in turn helping to transform societies. CLICK HERE TO VIEW SLIDES.

There was a wealth of expertise among the conference room audience. Representatives from the governments of Indonesia, Costa Rica, Nigeria and Honduras offered substantive comments from the floor. For example Pak Heru Prasetyo, Minister and Head of the REDD++ Agency in Indonesia, shared Indonesia’s experience of measuring poverty multidimensionally which show that more people are multidimensionally than income poor. These findings, he said, showed that we need to change statistics so they better capture the sources of poverty, including in rural and urban areas as well as forest and coastal regions.  Other countries also are in the process of working with a national MPI.

The benefit of an MPI 2015+ to monitor multidimensional poverty globally has also been favourably raised and considered by the OECD, ECLAC, the Sustainable Development Solutions Network, the Islamic Development Bank and UNDP’s Human Development Report Office, most with senior representation in the room as well.