You are here: Home » Multidimensional poverty measurement in the post-2015 development context

Side-event and webcast at the UN General Assembly

Highlights from the discussion

The Multidimensional Poverty Peer Network held a special side-event to coincide with the High Level Meetings of the 68th Session of the UN General Assembly. The event addressed the future of multidimensional poverty measurement in the context of the post-2015 development agenda. 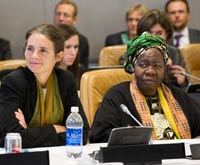 The Network, which includes governments of Colombia, Mexico, Chile, Philippines and Nigeria, along with the World Bank, UNDP and OECD, called upon the UN to adopt a new multidimensional poverty index (MPI) 2015+ (also described as an MPI 2.0) to track progress toward the new goals adopted after 2015. The countries and institutions gathered together:

* Were united in their calls for better data and better measures of poverty. 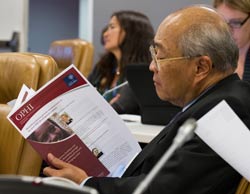 At the national level, the governments of Colombia, Mexico, the Philippines, Nigeria and Chile called on other nations to embrace new multidimensional poverty measures due to their effectiveness for policy change. They stressed that it is essential to complement any international MPI with nationally adapted indices for poverty reduction.

Their calls highlighted the pioneering work being undertaken by Southern nations on global poverty eradication, and the importance of South-South learning in driving change and innovation.

The video of the event can be accessed via the link here.

Highlights of some of the discussion’s key points are available on the OPHI website here.

You can view Sabina Alkire’s presentation on building a multidimensional poverty index here.

To read a Guardian report on the meeting, visit their website here.

Panelists at the event on 24 September included: 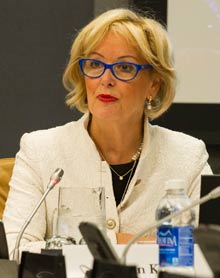 Data shows that people who are multidimensionally poor are not necessarily income poor. By adopting a multidimensional poverty measure to support the post-2015 development goals, we can incorporate the participatory insights of those living in poverty and ensure we eradicate both multidimensional and income poverty.

This event was organised by the German Ministry for Economic Cooperation and Development, CONEVAL of Mexico, the Department for Social Prosperity of Colombia, the Oxford Poverty and Human Development Initiative at the University of Oxford (OPHI) and the new Multidimensional Poverty Peer Network, a global network of policymakers dedicated to advancing the multidimensional measurement of poverty and improving poverty reduction efforts.