Both Costa Rica and El Salvador launched a national Multidimensional Poverty Index (MPI) on the same day, October 29th 2015.  OPHI’s co-founder John Hammock and Outreach Technical Director Adriana Conconi participated in these launches, John Hammock in Costa Rica’s capital, San Jose, and Adriana Conconi in San Salvador. In their remarks the OPHI representatives stressed both the academic validity and robustness of the measure and its potential for impacting people who live in poverty through better and more targeted social policies.

The President of Costa Rica, Mr. Luis Guillermo Solís, was joined by Second Vice President Ms. Ana Helena Chacón and Human Development Minister Mr.Carlos Alvarado in presenting the new measure to the country.  The President stressed that the MPI will be used to reduce extreme poverty by allowing the government to target government resources to those that need it. He also stressed that the MPI was the result of a strong partnership between the Government, the private sector through Horizonte Positivo and OPHI.

In El Salvador Christian Salazar, UNDP representative in the country, explained the need for a poverty measure that goes beyond income and that is not subject to price and exchange rate volatility. He was joined by Lilian Vega a technical advisor for the multidimensional poverty measurement team who presented the national MPI which has 20 indicators grouped in 5 dimensions. Mr. Roberto Lorenzana, the Technical Secretary of the Presidency, closed the event by summing up the relevance of the MPI as a tool for policy.

Photo Gallery from the Event in Costa Rica

Photo Gallery from the Event in El Salvador 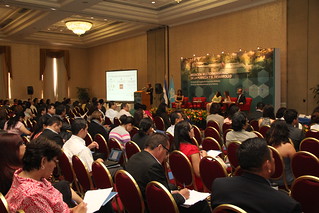