You are here: Home » In Media » Guardian covers calls for UN to adopt new poverty measure

A side-event co-organised by OPHI at the UN General Assembly on 24th September is the subject of an article by the UK’s Guardian newspaper, ‘We need new ways to measure poverty, UN meeting told’. 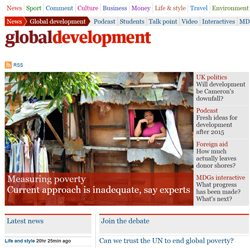 The event included speakers from the governments of Colombia, Mexico, Chile, Philippines and Nigeria, the World Bank, UNDP, OECD and OPHI, who all called on the UN to adopt a new multidimensional poverty measure to help track progress toward the global goals identified for the post-2015 agenda.

‘The international community needs to move away from using economic benchmarks to measure development progress if it is serious about ending extreme poverty, a meeting at the UN has been told,’ the Guardian reported.

‘….Representatives…argued that adopting a multidimensional poverty index (MPI) alongside economic measures would allow countries to get a more nuanced picture of poverty and whether progress towards addressing it was being made,’ it said.

Participants recommended that the UN adopt a new multidimensional poverty measure to complement the current $1.25 a day income standard. The assembled Southern governments also shared concrete ways their national multidimensional approaches to measuring poverty are being used for policy coordination, targeting, and monitoring, and are making visible progress that income poverty measures overlook.

Read the Guardian article here and find out more about the event here.