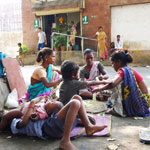 For the non-experts and youth we have intuitive infographics; for those who want a human angle, we have new stories from Cameroon and India. And for more technical users we have data tables on Multidimensional Poverty Index (MPI 2014), on MPI in Rural-Urban Areas,  on MPI by Subnational Regions, and on Changes in MPI and Destitution over time. We also have new draft papers on Destitution, Poverty Dynamics, and Inequality.

You can also watch a video contribution from Amina Mohammed, the UN Secretary-General’s Special Adviser on Post-2015 Development Planning, which featured in the launch.

The Global MPI is an international measure of acute poverty covering over 100 developing countries which provides invaluable insights for the post-2015 development agenda. At the launch, OPHI presented new estimations for 30 countries covering 2.5 billion people, and released new studies that answer the following questions:

Taken together, these studies demonstrate the value for policy of a global index of multidimensional poverty that reflects deprivations directly (without the need for PPPs), complements monetary measures, and can be disaggregated to provide powerful insights.  We look forward to your input in debating the relevance of an improved MPI 2015+ for the drive to eradicate poverty post-2015.

Speakers at the event included OPHI’s Sabina Alkire, Adriana Conconi, Suman Seth and Ana Vaz, co-authors of this year’s MPI outputs. The event also featured a contribution from Amina Mohammed, Special Advisor to the Secretary-General on Post-2015 Development Planning, and reflections from Kevin Watkins, Executive Director at the ODI, and James Foster, OPHI Research Associate and Professor of Economics and International Affairs at The Elliott School of International Affairs at The George Washington University.

The event was video streamed live, and the footage will be available to watch online soon; please check our website for details.