You are here: Home » News » Alkire attends Bhutan’s Meeting of Practitioners and Scholars on Happiness

Alkire attends Bhutan’s Meeting of Practitioners and Scholars on Happiness 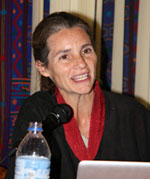 OPHI director Sabina Alkire was one of the presenters at the Centre for Bhutan Studies’ ‘Meeting of Practitioners and Scholars on Happiness’, which took place in Thimphu on 30-31 October. The meeting was held to discuss improvements to the survey questionnaires used in compiling data for the Gross National Happiness Index, and public policies in light of the 2010 GNH survey findings.

On 15 October, the Centre for Bhutan Studies launched ‘An Extensive Analysis of GNH Index’ in Delhi. The book-length analysis, which looks at the construction and findings of the index, was co-authored by Alkire, with Karma Ura, Tshoki Zangmo and Karma Wangdi. You can download the Extensive Analysis here.