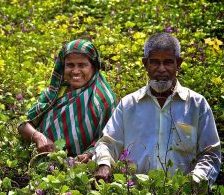 In April the pilot version of a new index was launched at the Food and Agriculture Organization of the United Nations (FAO) Headquarters in Rome designed to measure women’s empowerment, agency and inclusion in the agriculture sector.

The index, called the Project-Women’s Empowerment in Agriculture Index (or Pro-WEAI) has been developed jointly by the International Food Policy Research Institute (IFPRI) and Oxford Poverty and Human Development Initiative (OPHI), along with thirteen partner projects. The purpose of this new index is to help agricultural development projects identify areas of existing empowerment and disempowerment, track progress and measure impact.

The Pro-WEAI is an adaptation of the Women’s Empowerment in Agriculture Index (WEAI), originally developed in 2012 by IFPRI, the United States Agency for International Development (USAID), and OPHI.

Pro-WEAI is composed of 12 indicators of women’s empowerment in agriculture, organised into three domains: intrinsic agency power within), instrumental agency (power to), and collective agency (power with).

Domains and Indicators of Pro-WEAI Agnes Quisumbing, senior research fellow at IFPRI, said “The Pro-WEAI is a new tool that tells us what is happening within the household: Did participation in the project improve women’s control of income or intrahousehold harmony? Did it increase the possibility of domestic violence?”.

Bobbi Gray, research director of the Grameen Foundation, commented: “I believe the use of the Pro-WEAI tools is going to result in more approaches being designed in the future that engage men and women, maybe equally or in equitable ways—even if it’s for the benefit of women’s empowerment. This has been an eye-opening experience, and we look forward to continuing this sort of research in our other projects.”

Validation and testing of the index is still ongoing. The final version of the Pro-WEAI will be informed by the endline data and feedback from stakeholders and project partners.

More information is available at http://weai.ifpri.info/

A full recording of the Rome launch of the Pro-WEAI is available at http://www.fao.org/webcast/home/en/item/4695/icode/